A UK consumer champion has launched a £750 million ($907 million) legal claim against Apple over the 2017 iPhone throttling controversy that saw a software update effectively slow down older devices (via The Guardian). 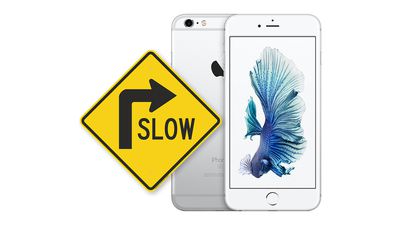 Market researcher Justin Gutmann has filed the claim with the UK's Competition Appeal Tribunal seeking the damages for up to 25 million UK owners of a range of older iPhone models affected by the update.

Gutmann claims that Apple introduced the features to disguise the fact that ‌iPhone‌ batteries were unable to cope with new iOS processing demands and that rather than recall products or replace batteries, Apple instead pushed users to download the software updates.

"Instead of doing the honorable and legal thing by their customers and offering a free replacement, repair service or compensation, Apple instead misled people by concealing a tool in software updates that slowed their devices by up to 58%," Mr Gutmann said.

"I'm launching this case so that millions of iPhone users across the UK will receive redress for the harm suffered by Apple's actions.

"If this case is successful, I hope dominant companies will re-evaluate their business models and refrain from this kind of conduct," he added.

Though introduced early in 2017, the power management features were not widely publicized until late 2017, leading many customers to feel deceived by Apple.

Apple apologized the same year for not better explaining how battery health could impact performance. It has since implemented a policy offering low-price no-questions-asked battery replacements for out-of-warranty devices.

In 2020, the company also agreed to pay up to $500 million to settle a long-running class action lawsuit in the United States that accused the company of "secretly throttling" older ‌‌iPhone‌‌ models. Apple has faced similar lawsuits in Belgium, Chile, Spain, Italy, and Portugal.

Gutmann's claim relates to the ‌iPhone‌ 6, 6 Plus, 6S, 6S Plus, SE, 7, 7 Plus, 8, 8 Plus and ‌iPhone‌ X models. It seeks compensation for each model owned and is an opt-out claim, meaning customers will not need to actively join the case to seek damages.

Commenting on the claim, Apple told The Guardian: "We have never, and would never, do anything to … degrade the user experience to drive customer upgrades.

"Our goal has always been to create products that our customers love, and making iPhones last as long as possible is an important part of that."

xkam1x
I have had laptops my whole life and every single one of them had the ability to throttle itself due to low/degraded battery. I must be due some compensation for all those years I suffered with old consumed battery.
Score: 22 Votes (Like | Disagree)

tomnavratil
What a joke of a lawsuit. With newer iOS and Apple's support for older devices, they introduced basically what computers have been doing for years. Apple's other options were not to support older devices and forcing people to buy newer ones or simply shutting their phones to make the UX even worse.
Score: 18 Votes (Like | Disagree)

jlc1978
Had Apple simply not made the software update available to older phones people would whine how Apple wasn’t giving them the update even if their phones could run them with reduced performance. Apple should have done a better job of explaining the we upgrade but punishing them for supporting older phones is ludicrous.
Score: 14 Votes (Like | Disagree)

ian87w
So... a $1 iTunes credit for the user while the lawyers are collecting thousands if not more?

I mean of course, Apple was at fault by not telling anyone they're doing it. But now that there's battery health percentage and Apple being transparent about battery replacement costs, I think it's a done deal.
Score: 14 Votes (Like | Disagree)

ponzicoinbro
I would like to see the magical battery that doesn’t degrade with age.

But it doesn’t exist.

So legal actions like this are just to stuff lawyer’s pockets with money.
Score: 13 Votes (Like | Disagree)
Read All Comments