AirPods 2 vs. AirPods 3 Buyer's Guide: Should You Upgrade? 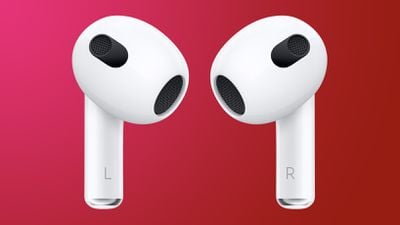 Apple continues to sell the second-generation AirPods that it introduced in March 2019, now for the lower price of $129. This makes them the entry-level model in the AirPods lineup.

The second-generation and third-generation AirPods share a large number of important features such as the H1 chip and beamforming microphones. Apple lists these identical features of the two devices:

Apple's breakdown shows that the two sets of AirPods share a number of key features. Even so, there are some meaningful differences between them that are worth highlighting, including design, spatial audio, and ‌MagSafe‌ charging.

The overall look of the third-generation AirPods is much more subtle and modern, but which design and fit you prefer is ultimately up to you.

Only the third-generation AirPods are IPX4-rated for sweat and water resistance. This includes both the earbuds and the ‌MagSafe‌ charging case.

The audio hardware of the third-generation AirPods is based on the ‌AirPods Pro‌, featuring a custom Apple-designed high-excursion driver and a custom high dynamic range amplifier, resulting in significantly better sound quality.

The third-generation AirPods also benefit from Adaptive EQ, which uses an inward-facing microphone and computational audio to create an accurate sound profile for every wearer. Sound is tuned in real time based on the fit of the AirPod in the user's ear, with the AirPods constantly adjusting and tuning the low and mid frequencies to account for what might be lost due to fit differences.

It is worth noting that as compact earbuds, the sound quality of the standard AirPods will not match higher-end offerings such as the AirPods Max. Nevertheless, if you highly value sound quality, you will appreciate the better audio hardware of the third-generation AirPods.

The third-generation AirPods join the ‌AirPods Pro‌ and ‌AirPods Max‌ in offering spatial audio with Dolby Atmos. Apple Music songs, TV shows, and movies can take advantage of spatial audio and it will sound like the audio is coming from all around you when the feature is enabled for an immersive, theater-like experience.

Dynamic head tracking is also available, which makes music, TV, and even Group FaceTime calls more engaging. Spatial audio algorithms and directional audio filters adjust the frequencies that each ear receives, allowing AirPods to produce sound all around the user.

Spatial audio works with ‌Apple Music‌ and the Apple TV app, but it is also compatible with many third-party apps. The second-generation AirPods do not offer spatial audio, so you will have to get the third-generation model to have this experience.

The standard AirPods feature an all-new skin-detect sensor to more accurately discern if AirPods are in the ear to pause playback. The new skin-detect sensor works by detecting water content in the wearer's skin, which ensures that it does not mistake pockets, tables, or other surfaces for skin.

Instead of skin-detect sensors in each earbud, the second-generation AirPods use dual optical sensors to detect if they are in a user's ear. While they effectively perform the same function, the optical sensors can simply tell when they are against a surface or covered up, rather than specifically against skin. This means that if you put an AirPod in a pocket or on a surface, it could accidentally resume playback.

The second-generation AirPods can be controlled by tapping on the stems, and users can double-tap to play, skip forward, or answer a phone call.

The third-generation AirPods feature force sensor controls like the ‌AirPods Pro‌, allowing users to press once to play, pause, or answer a phone call, press twice to skip forward, press three times to skip back, and press and hold for ‌Siri‌.

The force sensor controls allow for a wider range of commands to be issued, but some users may accidentally dislodge an AirPod when using them. On the other hand, the second-generation AirPods tap-based controls are very sensitive and may be accidentally triggered. It is ultimately a matter of personal preference which input mechanism you prefer.

If you are looking for AirPods, but are looking for Active Noise Cancellation (ANC) or an in-ear design, there are the ‌AirPods Pro‌, which start at $249. These have all of the same features as the third-generation AirPods, but have silicone tips to fit inside the ear canal and offer ANC, as well as Transparency mode to let noise from the outside world in.

For a higher-fidelity audio experience, there are the ‌AirPods Max‌, which are priced at $549. These are over-ear headphones that take the listening experience to the next level with improved sound quality, better Active Noise Cancellation (ANC), and up to 20 hours of listening from one charge.

Whether you are looking for AirPods that are suitable for workouts or use in the rain, a more immersive experience with music and movies, compatibility with an existing ‌MagSafe‌ charger, or simply a more subtle appearance, the third-generation AirPods are a much better choice. If you already have the second-generation AirPods, it may worth upgrading to the third-generation model if you are attracted to any of the new features or are looking for a range of overall improvements.

The second-generation AirPods are still a good introduction to the AirPods experience with seamless pairing, automatic device switching, and Hey ‌Siri‌ functionality, but if possible you should get the third-generation model due to its large number of improvements. AirPods frequently see substantial discounts through Amazon and other third-party retailers, so stepping up to the third-generation version may be more worth it if you can take advantage of one of those deals.

Wednesday October 20, 2021 12:45 pm PDT by Hartley Charlton
Earlier this year, Apple announced a major update for its standard AirPods, with the new earbuds featuring spatial audio, Adaptive EQ, force sensor controls, sweat and water resistance, MagSafe charging, and more. Should you consider purchasing the $179 third-generation AirPods, or do you need the higher-end AirPods Pro, which sell for $249? Our guide helps to answer the question of how to...
Read Full Article • 79 comments

Saturday January 23, 2021 10:02 am PST by Juli Clover
October 18: Apple has announced the third-generation AirPods, available to order now ahead of an October 26 launch. This guide will be updated shortly. Apple is working on a third-generation version of the AirPods, and for this updated version rumored to be launching in 2021, we could see some design changes for the first time since the AirPods came out in 2016. This guide covers everything...
Read Full Article • 82 comments

Wednesday January 13, 2021 12:42 pm PST by Juli Clover
Since the AirPods Pro were released in October 2019, we haven't seen an updated version, but that could change in 2021. Apple is rumored to be working on a new version of the AirPods Pro, the AirPods Pro 2, and there could be some design changes in store. This guide covers everything that we know so far about the AirPods Pro 2. Design Changes The AirPods Pro already feature a shorter...
Read Full Article

Monday October 25, 2021 2:02 pm PDT by Juli Clover
Apple today released iOS 15.1, the first major update to the iOS 15 operating system that was released in September. iOS 15.1 introduces new features that were delayed from iOS 15 plus it adds camera improvements for iPhone 13 Pro users. This guide highlights everything that's been added in the iOS 15.1 update. SharePlay Integrated into the FaceTime app, SharePlay is a feature that's...
Read Full Article • 92 comments

Friday October 15, 2021 2:10 pm PDT by Juli Clover
Apple's first fall event of 2021 focused on the iPhone and the Apple Watch, but the second, set to be held on Monday, October 18, is expected to be Mac-centric. The upcoming event will see the debut of the highly anticipated 14 and 16-inch MacBook Pro models, plus we could also get refreshed AirPods and a new Mac mini. Subscribe to the MacRumors YouTube channel for more videos. This guide...
Read Full Article • 199 comments

Apple's 2022 iMac Pro: Everything We Know

Friday November 12, 2021 2:14 pm PST by Juli Clover
Apple is working on a redesigned version of the larger-screened iMac that could bring back the "iMac Pro" name to differentiate it from the 24-inch iMac that Apple released in 2021. The larger iMac is expected to have an updated design, M1 Pro/Max chips, and a mini-LED display, and it could launch in the first half of 2022. Design The upcoming iMac will be similar in design to the 24-inch...
Read Full Article • 380 comments

Friday October 29, 2021 2:02 pm PDT by Juli Clover
We're still many months away from the launch of the Apple Watch Series 8, but we're already hearing details about Apple's next-generation wrist-worn device. This guide aggregates everything we know about the Apple Watch Series 8 so far based on rumors. Note that it's still early, so these features have yet to be confirmed. Design and Size Options Little is known about the design of the...
Read Full Article • 106 comments