2023 is here, and Apple rumors are already flying about this year's iPhone 15 lineup, the long-rumored mixed-reality headset and more. 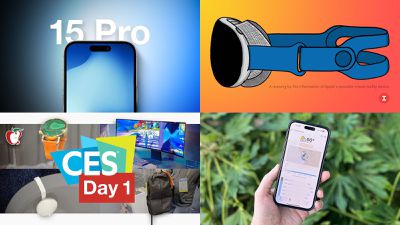 This week is also the annual CES event in Las Vegas where all sorts of companies are showing off their latest products, while the first of the year saw Apple finally shut down the much-loved Dark Sky weather app it acquired back in 2020. Read on for all the details on these stories and more from the past week!

Apple's next-generation iPhone 15 Pro and iPhone 15 Pro Max will have several new features, including a titanium frame, solid-state buttons with haptic feedback, and more RAM, according to analyst Jeff Pu.

The solid-state volume and power buttons would be similar to the Home button on the latest iPhone SE. Instead of physically moving, two new Taptic Engines would simulate the feeling of the buttons being pressed.

Apple's mixed-reality headset will feature a physical dial for switching to a view of the real world, a waist-mounted battery pack, small motors to automatically adjust the internal lenses, and much more, according to a report this week from The Information.

The headset is expected to be announced in 2023, with analyst Ming-Chi Kuo saying this week that Apple is likely to reveal it at a spring media event or at WWDC in June as continued development delays have pushed back mass production to late in the second quarter or into the third quarter of this year.

MacRumors is at CES 2023 in Las Vegas this week for a hands-on look at all of the new Apple-related devices and accessories being announced.

We've shared video recaps of the first, second, and third days at CES 2023, offering a closer look at new products like Hyper's backpack and Ember's travel mug with support for Apple's Find My app, an iPhone-connected urine reader from Withings, and other interesting finds on the show floor.

As planned, Apple has shut down popular weather app Dark Sky. The app had already been removed from the App Store in September and it stopped functioning for existing users on January 1.

Apple acquired Dark Sky in March 2020 and it has since incorporated many of the app's features into the preinstalled Weather app on the iPhone, iPad, and Mac. Earlier this month, Apple shared a support document with information on how Dark Sky users can use the Weather app.

At CES this week, AMD claimed that its new Ryzen 9 7940HS chip for Windows laptops is up to 34% faster than Apple's M1 Pro chip available in the latest 14-inch and 16-inch MacBook Pro.

While it appears that Apple silicon competition is increasing, it is worth noting that Apple introduced the M1 Pro chip around 14 months ago and that AMD did not offer a comparison to Apple's faster M1 Max chip.

While Apple weather is better, I miss the ease of use and ability to see the global animation of weather several days into the future that Dark Sky had. Too bad they just could not leave the data source on.
Score: 3 Votes (Like | Disagree)

FightTheFuture
The fun part of AMDs presentation was that the CES AV techs were running it on M1 MacBooks.
Score: 3 Votes (Like | Disagree)

(if you think that’s an overstatement: https://www.macrumors.com/2021/02/04/apple-mixed-reality-headset-features-report/)
Score: 2 Votes (Like | Disagree)

anthogag
Apple could change iPhone “Pro” to ”Ultra”. Too many other businesses are using “Pro”; it is now ridiculous.
Score: 1 Votes (Like | Disagree)

I'm not really up to speed on today's PC laptop specs, so I did a quick search and found this article ('https://www.laptopmag.com/articles/all-day-strong-longest-lasting-notebooks') on laptops with the best battery life. Apple's 13" M2 MacBook Pro comes in at 18:20 of battery life. The Dell Latitude comes in at 18:17. Yes, MacBooks have impressive battery life. And so do plenty of PCs these days.

The Dell Latitude “achieved” that by having a display with a paltry 1920 x 1080 resolution and only 150 nits. That’s pathetic. You won’t find a PC that can match brightness, resolution, and maintain that level of battery life.
Score: 1 Votes (Like | Disagree)

Where the M1 excels is efficiency: performance with low power. There are plenty of x86 chips that are more powerful than an M1, but they achieve this by using far more energy. I don’t see energy usage in AMD’s charts.

Because a lot of people don't care about energy usage. They are only interested in performance.
Score: 1 Votes (Like | Disagree)
Read All Comments