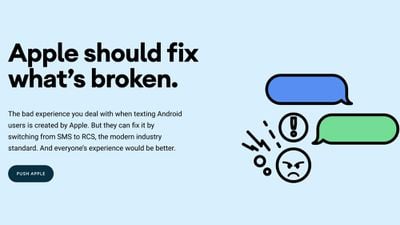 It provides support for higher resolution photos and videos, audio messages, and bigger file sizes, plus it adds improved encryption, cross-platform emoji reactions, and more reliable group chats across different devices. Google has been pushing Apple to adopt RCS for well over a year now, but so far, Apple is not budging.

Google's new blog post points out that this week marks the 30th anniversary of the SMS messaging standard, as the first SMS message was sent on December 3, 1992. Google argues that it's time for an update, calling out Apple for "dragging its heels."

Google points out that with RCS, cross-platform end-to-end encrypted messaging would be available. Features like real-time typing indicators, read receipts, higher-quality photos and videos, and more control over group chats would be standard on both iPhones and Android phones.

All major mobile carriers and manufacturers have implemented RCS support, including AT&T, Verizon, T-Mobile, Motorola, Nokia, OnePlus, Samsung, Sony, and others. Apple continues to be the lone holdout, and the company has so far hardly acknowledged Google's attempts to push RCS adoption.

There is no word on if Apple has considered supporting RCS, nor when such support might be implemented. In a September interview, Apple CEO Tim Cook said that it is not a priority. "I don't hear our users asking that we put a lot of energy in on that at this point," said Cook.

Cook further suggested an iPhone upgrade to a reporter who mentioned having trouble texting photos to his mother who uses an Android phone. "Buy your mom an ‌iPhone‌," he said.

Google has gone as far as publishing an entire "Get the Message" website on RCS and Apple's lack of adoption for the feature, encouraging Apple customers to ask Apple to "fix what's broken" by switching from SMS to RCS. Google has also published anti-Apple ads promoting RCS, but nothing so far has caught Apple's attention.

ignatius345
Google has started and abandoned SO MANY different messaging platforms at this point. They're just jealous they didn't stick with one all the way through as Apple has with iMessage.
Score: 67 Votes (Like | Disagree)

till
Pretty much everyone outside the US has been using external apps as the de facto messaging standard for years, mainly WhatsApp. There's no particular reason to rely on your phone manufacturer or your telco for this kind of service.
Score: 59 Votes (Like | Disagree)

rgeneral
Apple should release an ad. Google should fix their messaging by giving all their users iPhones.
Score: 52 Votes (Like | Disagree)

jdb8167
The carriers will have to push Apple to do RCS if they want it. Apple isn't going to support it just because Google wants to whine about it. If the carriers deprecated SMS and said that they would discontinue support then Apple would switch to RCS.
Score: 46 Votes (Like | Disagree)

Google will stay mad at Apple but they won’t bother to innovate themselves. ?‍♀️