Microsoft's popular third-party keyboard for iOS, SwiftKey, is back on the App Store just weeks after the company announced it would be shutting down the app and delisting it from the platform. 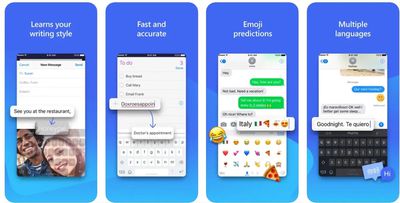 In September, Microsoft said SwiftKey for iOS was being shut down and removed from the ‌App Store‌ for no clear reason. SwiftKey has been a popular alternative for iPhone users to Apple's default iOS keyboard, leaving many disappointed by the decision. Now, a few weeks later, Microsoft says due to customer feedback, it is bringing the app back to the ‌App Store‌.

"Based on customer feedback, SwiftKey iOS has been relisted on the Apple ‌App Store‌," said Microsoft spokesperson Caitlin Roulston to The Verge. The news was also shared on Twitter, with a Microsoft employee teasing for users to "stay tuned" to what's in store for the app.

Mity
If iOS had a decent keyboard, this wouldn't even be an issue. I would rather have an iOS keyboard with an optional number row and multi-punctuation key than a "dynamic island." That and USB-C. Sadly, that would've been progress.

baryon
I can only use my iPhone with SwiftKey. It has many bugs (crashes and freezes several times a day) and it's not perfect but it still beats the built in keyboard by far. It has multi-language support in a single keyboard, swipe to type in all languages (not just English and a select few), and autocorrect seems to be slightly less terrible than iOS.

The iOS keyboard is an absolute joke though. I don't think I could go a single day with it. Just having to switch between keyboard languages on a per-app basis a million times a day is ridiculous, trying to keep track of which keyboard to select for which person before starting a conversation is a nightmare. And the lack of swipe to type and word suggestions in most languages is also lame. It's 2022, not 2007.

When SwiftKey crashes, the iOS keyboard switches back to the built-in keyboard, which you don't always notice until you've tried typing 10 words and they've all been autocorrected to something totally different. A neat trick is that you can completely remove the iOS keyboard leaving only SwiftKey, so when it does crash, it's forced to restart itself.

Gboard is terrible, it crashes maybe 50% of the time I type and freezes completely, making typing impossible until you restart the app.

Swype was all right but I seem to get better autocorrect with SwiftKey.

And... that's about all there is. I don't get why all the other keyboards focus on themes and colors when what we really need is a keyboard that improves the typing experience, not one with poneys in the background.

That said, I really hope they make improvements because to me one of the worst things with using a smartphone is the keyboard.

If I had one wish, it would be this: If I type a word, and I spelt it correctly, please, don't change it. Please. For the love of God. Just leave it. Also, if I type a word and only ONE letter is wrong, just try changing that one letter before adding 7 more. I'm so tired of typing something like "Tablw" and having it be corrected to something like "Tabloids". If that was the word I meant, why would I have just completely forgotten to type 3 whole letters? Seems like an impossible problem to fix after all these years. We now have AI and all kinds of amazing tech yet we're still here typing with the same tech we had when the iPhone came out in 2007.

hagar
Is it me or is the default autocorrect on iOS broken?

Compared to Google we’re in the dark ages.

Besides it being extremely limited there are some strange things going on: I have to constantly switch between multiple languages and obviously I forget to manually do this. And then words from different languages get mixed up as it’s “autolearning”. But I also see strange words (from other people?) appearing.

Still, I never use third party keyboards because the iOS implementation also leaves a lot to be desired in terms or reliability.
Score: 16 Votes (Like | Disagree)

ponzicoinbro
That's nothing. I just released MindKey. It uses advanced deep learning machine learning artificially intelligent mind bending future reading lip reading privacy evasion data collection techniques to type what you are about to think and even knows you are about to change your mind before you change your mind about what you are going to type.

Sequoia and Andressen Horowitz just gave me $500 million seed funding and I'm changing my name, taking the money and hiding in the Bahamas. My app was fake.
Score: 14 Votes (Like | Disagree)

firewire9000
Best news of the year. This is the only keyboard that has the predictive keyboard in my language and it works very well.
Score: 14 Votes (Like | Disagree)

The stock keyboard is horrible for bilingual people who frequently switch languages on the fly. Unfortunately, third-party keyboard integration is bad enough for most of us to stick to the stock one.
Score: 13 Votes (Like | Disagree)
Read All Comments