Who's ready for a breather? A flurry of hardware and software releases following Apple's "Far Out" event earlier this month is finally on a bit of a pause, with the Apple Watch Ultra and second-generation AirPods Pro now making their way into customers' hands while we have a couple of weeks before the iPhone 14 Plus launches. 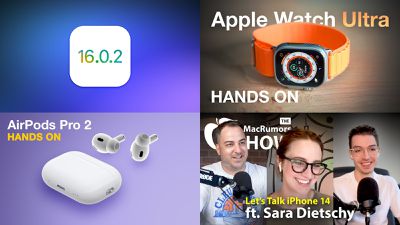 This week saw the two major hardware releases, but also an important iOS update addressing some bugs with the latest iPhone models and iOS 16 in general, while the more significant iOS 16.1 update continues through beta testing. Be sure to read on below for details on these stories and more as we continue to explore everything new in Apple's latest releases.

Apple has released iOS 16.0.2 with several bug fixes. Notably, the update addresses an issue with the rear camera shaking and vibrating uncontrollably on the iPhone 14 Pro and iPhone 14 Pro Max.

The software update also addresses an issue with excessive copy and paste permission prompts on all iPhones running iOS 16, an issue where touch input was unresponsive on some iPhone X, iPhone XR, and iPhone 11 displays following hardware service, and more.

Meanwhile, Apple continues to test iOS 16.1, which will include support for Live Activities in third-party apps, a new Clean Energy Charging feature in the United States, availability of Apple Fitness+ without an Apple Watch, support for Matter accessories in the Home app, and more.

Hands-On With the New AirPods Pro 2

Apple's second-generation AirPods Pro have begun arriving to customers, and we've had a chance to go hands-on with the upgraded earbuds.

We've also rounded up both written and video reviews of the new AirPods Pro from select media and YouTube channels that had early access for more thorough looks. The reviews tested out sound quality, active noise cancellation, battery life, and more.

Like the new AirPods Pro, the all-new Apple Watch Ultra is now officially available as the first pre-orders have started arriving.

We've gone hands-on for an early unboxing and initial impressions, and we've rounded up both written and video reviews of the Apple Watch Ultra, which is bigger and better than any other Apple Watch model but isn't considered to be a "Garmin killer" yet due to a lack of certain features, such as offline maps and recovery metrics for workouts.

Everything New for iPhone in iOS 16.1 Beta 2

Apple this week seeded the second beta of iOS 16.1 to developers and public beta testers. As usual, the latest beta contains a handful of new features, changes, and improvements for the iPhone.

We've rounded up everything new in iOS 16.1 beta 2, including a design tweak to the battery percentage icon in the status bar and more, so be sure to check out the list if you install the beta on your iPhone.

The new car crash detection feature on all iPhone 14 models is hard to test given that reviewers don't want to risk physical injuries, but one YouTuber has managed to test the feature in a driverless car.

Note that the video does not serve as a scientific test of the feature and is in a controlled environment, so it should be considered purely entertainment, but at least we finally have a closer look at the feature out in the wild.

YouTuber and content creator Sara Dietschy joined us this week on The MacRumors Show podcast to talk through our experiences of all of the iPhone 14 and 14 Pro lineup's new features and more.

Listen to The MacRumors Show via apps like Apple Podcasts, Spotify, Pocket Casts, Castro, Google Podcasts, or subscribe by copying our RSS feed directly into your podcast player. You can also watch a video version of the podcast on our YouTube channel.

?You do the hokey pokey and you turn yourself about, that's what iOS is all. A. About.?
Score: 6 Votes (Like | Disagree)

Headliner is the speed at which iOS 16.0.2 was released.

Crash detection is interesting feature. I’d like to know how apple tested it, and when this will be offered by the competition.

Google Pixel phones have had that feature for a while now.
Score: 4 Votes (Like | Disagree)

JosephAW
Now that we're on iOS 16 for the iPhone 14, the ability to just double tap a video to make it full screen is gone, now you have to use a two finger gesture. o_O
Score: 3 Votes (Like | Disagree)

Now that we're on iOS 16 for the iPhone 14, the ability to just double tap a video to make it full screen is gone, now you have to use a two finger gesture. o_O

Yes, personally I don’t see why this was changed….I also find it annoying. ?
Score: 3 Votes (Like | Disagree)
Read All Comments