New iPhones are here! Three out of the four new iPhone models launched this week, as well two out of the three new Apple Watch models, plus we got the official release of iOS 16, so it was a very busy week in the Apple world. 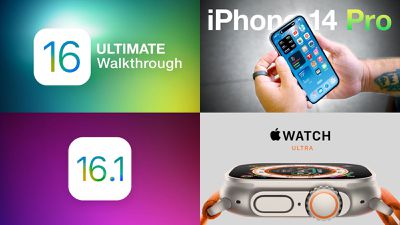 Apple also released the first beta of iOS 16.1 that will deliver some of the new features that didn't make the cut for the initial iOS 16 release, while Garmin made headlines for its response to the rugged Apple Watch Ultra that launches next week, so read on for details on these stories and more!

The Ultimate iOS 16 Walkthrough: Guides and How Tos for Every New Feature

Apple this week released iOS 16 to the general public after several months of beta testing. The software update is compatible with the iPhone 8 and newer and has a long list of new features and changes.

After updating to iOS 16, be sure to check out our comprehensive walkthrough of every new feature, complete with dozens of guides and how-tos. We also have an overview of which options and settings you should set up first once you upgrade.

In addition to our detailed iOS 16 walkthrough, we've also singled out six new features worth checking out once you've updated your iPhone.

One of the headline features of iOS 16 is the ability to customize the Lock Screen with widgets, wallpapers with a depth effect, custom fonts, and more. Another useful feature introduced is the ability to edit or unsend iMessages for a short time after they are sent.

Hands-On With the New iPhone 14 Pro

The iPhone 14, iPhone 14 Pro, and iPhone Pro Max are here, and we've already gone hands-on with the Pro models to check out some of the new features with a special focus on the Dynamic Island that replaces the display notch.

Select media publications and YouTube channels have had a bit more time with the latest devices and have provided closer looks at them. Reviews found that the Dynamic Island shows promise, while one review was particularly impressed with 48-megapixel ProRAW photos shot with the iPhone 14 Pro's improved camera.

Reviews are also out for the standard iPhone 14 and the Apple Watch Series 8.

Everything New in the iOS 16.1 Beta

Just a few days after releasing iOS 16, Apple has already moved on to beta testing iOS 16.1, which contains a handful of new features.

We've put together a list of everything new for the iPhone in the first beta of iOS 16.1, including Live Activities, Clean Energy Charging, support for Matter accessories in the Home app, and more. Apple said the update will be released later this year.

Notably, all iPhone 15 models are widely expected to feature a USB-C port instead of a Lightning connector. This would significantly benefit data transfer speeds when exporting files from an iPhone to a Mac or other device.

It didn't take long for watch maker Garmin to respond to the all-new Apple Watch Ultra, which competes in the high-end smartwatch category.

In a tweet late last week, Garmin said it measures battery life in "months" and "not hours," which appears to be mocking the Apple Watch Ultra's advertised 36-hour battery life. By comparison, Garmin says its Enduro 2 smartwatch gets up to 46 days of battery life.

George Dawes
I have to say for the money that ultra watch is a lovely bit of kit
Score: 2 Votes (Like | Disagree)

macmac30
When I look at the Ultra, I see more space for future sensors from hopefully RKLY.…
Score: 1 Votes (Like | Disagree)
Read All Comments

Thursday September 22, 2022 7:57 am PDT by Sami Fathi
A copycat version of the iPhone 14 Pro's Dynamic Island has arrived on Android's Google Play Store in the form of an app called "dynamicSpot." The app, still in beta, offers customers several different experiences at the top of their smartphones. In its current form, dynamicSpot offers playback control for songs, timers, battery status, and more features coming soon, according to the app's...
Read Full Article • 211 comments