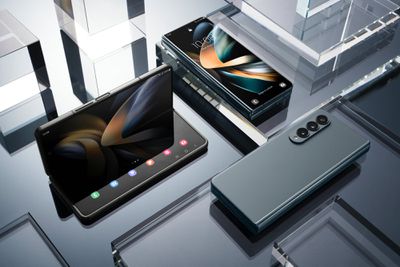 According to a report from The Elec, that same material set is rumored to be used for the upcoming iPhone 14 Pro and ‌iPhone 14 Pro‌ Max displays. The lower-end models of the ‌iPhone 14‌ will stick with the M11 material set.

Other than the benefits offered by the new display material, no other display tech changes are rumored for this year's upcoming iPhone. Apple introduced ProMotion with support for up to 120Hz in the iPhone 13 Pro last year.

The ‌iPhone 14 Pro‌ will be capable of taking 48MP photos when lighting conditions are ideal, but when they're not, the ‌iPhone‌ will resort to a process known as pixel-binning to take 12MP images. The ‌iPhone 14 Pro‌'s wide camera is also said to be receiving a 21% larger sensor to provide more detail to photos and improved low light capabilities.

Originally rumored for the iPhone 13, this year's ‌iPhone 14‌ could be the first ‌iPhone‌ to feature the newer WiFi 6E standard. The new standard offers improved speed, range, and capacity on public networks.

The Galaxy Fold 3 was the first Galaxy Fold to support WiFi 6E, with the Galaxy Fold 4 and Galaxy Z Flip 3 following suite. You can learn more about WiFi 6E and the improvements it offers here.

‌iPhone 14 Pro‌ renders made by Ian Zelbo
The Galaxy Fold 4 is powered by Snapdragon 8+ Gen 1 chips that are based on the 4nm fabrication process and can reach speeds of up to 3.2GHz. The ‌iPhone 14 Pro‌ will feature Apple's new and faster A16 Bionic chip.

Both the Galaxy Fold 4 and the ‌iPhone 14‌ will be equally fast and speedy for the majority of customers and their day-to-day workflows. One difference, however, will be RAM. The Galaxy Fold 4 features 12GB of RAM that enables true multitasking on the device, while the ‌iPhone 14 Pro‌, like current high-end iPhones, is expected to feature just half of that.

The RAM on the upcoming ‌iPhone‌ will feature LPDDR 5 type of memory, which is faster than previous models. This means that even with just 6GB of RAM coupled with iOS's memory management, the ‌iPhone 14 Pro‌ is likely to remain competitive with Samsung's 12GB of RAM offering.

‌iPhone 14 Pro‌ renders made by Ian Zelbo
On the outside display, the Galaxy Fold 4 has a 10MP selfie camera, and the inside features an under-the-display 4MP camera. Like the Galaxy Fold 4, the ‌iPhone 14‌ will feature an upgraded front camera.

Rumors point to the ‌iPhone 14‌'s selfie camera being a "high-end" camera with a wider f/1.9 aperture and autofocus capabilities. The wider aperture will allow more light to pass through the lens to reach the sensor for sharper, crisper photos and improved depth of field.

Apple Knowledge Navigator
You can fold an iPhone too, but I don’t recommend it.
Score: 22 Votes (Like | Disagree)

Thank you Samsung for thinking different in bringing true innovation forward that Apple will inevitably copy.

You mean show Apple how not to do things over a 4-5 year period while Apple refines similar features before releasing it.

You mean show Apple how not to do things over a 4-5 year period while Apple refines similar features before releasing it.

It’s called learning and refining, something Apple is also good at doing. Shouldn’t you appreciate that? The iPhone 13 has refined and improved over the iPhone X despite looking nearly the same.

BOTH products can BOTH be good. It’s not one or the other.
Score: 15 Votes (Like | Disagree)

W2u7Yw4HaD
There has been a lot of this late on this website, where we are comparing features of a non-existent, but we think maybe, new iPhone and existing products.... I know the writers want to keep the website fresh, however, maybe energy might be spent elsewhere.. Improvement to guides and video guides, etc.. Not a dig, just a suggestion.. This is still the only mac website I visit for news..
Score: 14 Votes (Like | Disagree)

tmoerel
The biggest difference is that Samsung runs Android.....and thus it will never be an option for me!! I do not trust Google whatsoever!!
Score: 11 Votes (Like | Disagree)
Read All Comments

Wednesday August 10, 2022 6:05 am PDT by Juli Clover
Samsung today announced the launch of its next-generation foldable smartphones, including the Galaxy Z Flip 4 and the Galaxy Z Fold 4. Samsung has been producing foldable devices since 2019, so these new smartphones represent four years of development. The Galaxy Z Flip 4 features a 120Hz 6.7-inch AMOLED display and it folds out vertically. When closed, there is a 1.9-inch AMOLED display for ...
Read Full Article • 329 comments

Thursday September 8, 2022 6:22 am PDT by Sami Fathi
Following the announcement of the iPhone 14 and iPhone 14 Pro, Samsung has released a new ad that seems to be aimed at convincing iPhone customers to try out its latest Galaxy Z Flip4, which, as the name suggests - flips. The ad, titled "Join the flip side," starts with a Flip4 user showing off the device's design to what is presumed to be an iPhone user, highlighting features such as how it ...
Read Full Article • 219 comments

Camera Upgrades for All iPhone 14 Models: Everything We Know

Sunday October 2, 2022 6:41 am PDT by Joe Rossignol
Apple is developing new iPad Pro, Mac, and Apple TV models, and at least some of these products will be released in October, according to Bloomberg's Mark Gurman. However, Gurman continues to believe that Apple is unlikely to hold an event this month. In the latest edition of his Power On newsletter, Gurman said "the big iPhone 14 unveiling last month was probably it for Apple in 2022 in...
Read Full Article • 137 comments