Apple is purportedly ramping up mini-LED chip production and bringing more manufacturers into its supply chain to meet demand for new devices in 2022, DigiTimes reports. 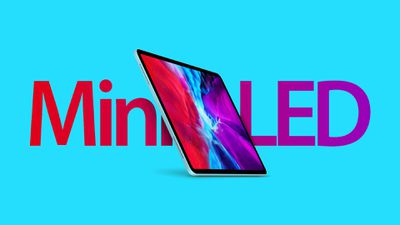 Apple has expanded its use of mini-LED technology over the past three years and currently offers three devices that feature mini-LED displays: The Pro Display XDR, the 12.9-inch iPad Pro, and the high-end MacBook Pro. The company is expected to have several new devices with mini-LED displays in the pipeline for launch this year, including the 11-inch iPad Pro, 27-inch iMac Pro, redesigned MacBook Air, and potentially even new external displays.

Taiwan's Epistar is currently Apple's main supplier of mini-LED chips, but the company's growing number of devices with mini-LED displays has reportedly forced it to seek additional suppliers. Citing industry sources, DigiTimes claims that China's Sanan Optoelectronics is significantly undercutting the prices of Apple's current suppliers and has now been granted certification to supply the company with chips for mini-LED backlit displays.

Apple's demand for mini-LED display technology is "expected to significantly increase in 2022," according to DigiTimes, likely due to the continued success of the high-end MacBook Pro Models as well as the launch of new devices. To meet Apple's growing demand, Epistar is expanding its production facilities in China to ramp up production starting in the second quarter of 2022, and Sanan Optoelectronics could begin shipments around the same time.

nepalisherpa
While I do notice blooming especially in a very dark environment (such as at night with lights turned off), I LOVE the display on the 12.9. Watching HDR (especially Apple TV+ shows) has been amazing and I could never go back to "gray black".
Score: 4 Votes (Like | Disagree)

kalafalas
MiniLED does not offer thinner designs over oled. In fact miniLED is quite thick, even thicker than edge lit.

MayaUser
Beautiful, maybe next week we will see a new mac mini along side with one of the upcoming external display?!
Score: 2 Votes (Like | Disagree)

Froggy780
Doesn‘t make sense that a redesigned MacBook Air is slated to have mini-LEDs when there’s also rumors of an entry level Macbook pro without it. In general the entry level MacBook Pro rumor seems a bit odd.
Score: 1 Votes (Like | Disagree)

Apple could always announce it with a future release date. They do it all of the time.
Score: 1 Votes (Like | Disagree)
Read All Comments

Thursday July 22, 2021 9:03 am PDT by Joe Rossignol
Apple is widely rumored to be planning a new iPad mini with a significant redesign, including a larger 8.5-inch to 9-inch display with slimmer bezels, a Touch ID power button instead of a home button, a USB-C port instead of a Lightning connector, and more. According to a paywalled preview of a DigiTimes report today, the sixth-generation iPad mini will also feature a mini-LED display:BLU...
Read Full Article • 104 comments