Some users are noticing more blooming on the 12.9-inch iPad Pro's Liquid Retina XDR mini-LED display than expected, despite Apple's claims that the effect is minimized. 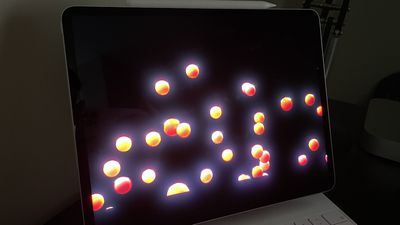 According to recently published Apple Support documents, the ‌iPad Pro‌'s Liquid Retina XDR display is designed to improve on "the trade-offs of typical local dimming systems, where the extreme brightness of LEDs might cause a slight blooming effect," suggesting that the effect should be minimized.

The Liquid Retina XDR display improves upon the trade-offs of typical local dimming systems, where the extreme brightness of LEDs might cause a slight blooming effect because the LED zones are larger than the LCD pixel size. This display is designed to deliver crisp front-of-screen performance with its incredibly small custom mini-LED design, industry leading mini-LED density, large number of individually controlled local dimming zones, and custom optical films that shape the light while maintaining image fidelity and extreme brightness and contrast.

In spite of this, some ‌iPad Pro‌ owners are noticing more blooming than expected and highlighting their experience on social media.

After spending 24 hours with it I can safely say #MiniLED is NOT the display tech #Apple is likely gonna keep for the iPad long term. OLED is far superior with picture quality. This is definitely an improvement don’t get me wrong, but it’s not OLED level good IMO. — Josh Teder (@JoshTeder) May 22, 2021

Thanks to the adoption of mini-LED display technology, the ‌iPad Pro‌ features 2,500 local dimming zones. Local dimming allows some areas of an LED screen to dim almost off for darker, truer blacks, while preserving the bright parts of the screen. The technology can increase the contrast ratio of images significantly and enable the intense highlights of HDR content.

On a display with local dimming, if a zone is lit up and an adjacent zone is not, there may be an artifact toward the part of the screen that becomes brighter than its neighboring zone called "blooming."

OLED displays, such as those used on the iPhone 12 lineup, do not need local dimming since they are able to turn off individual pixels to achieve true blacks, all with no blooming effect. Local dimming can be a way to get near-OLED levels of picture quality, but it struggles to achieve the same level of contrast.

Blooming on the new 12.9-inch ‌iPad Pro‌ is therefore to be expected to some extent, but users seem to be divided about how bad the effect actually is.

What can happen when you have 2,500 dimming zones. This is noticeable when you use iPad Pro 2021 in total darkness. iPad Pro 2018 has less distracting blooming because the bloom covers a large area. And there's IPS glow. More on this tomorrow https://t.co/yGqFwdeJwz pic.twitter.com/7q82vAvc5d — Parka (@ParkaBlogs) May 21, 2021

Some MacRumors Editors experienced blooming with the 12.9-inch ‌iPad Pro‌'s XDR display, but others found that blooming was not noticeable at all.

Where blooming is visible, especially on HDR content with isolated bright shapes on a black background, it is most prominent on the ‌iPad Pro‌ when viewing the display from an off-axis angle and in a darkened environment. That being said, MacRumors Editors believe that the effect of blooming on the ‌iPad Pro‌ looks less severe in person than it does in images, likely due to exposure and image processing.

Although mini-LED display technology is expected to come to new MacBook Pro models later this year, other rumors suggest that the company is looking to use OLED displays for iPad and MacBook devices from 2022.

mozumder
I don't know why Apple just didn't use OLED in the first place for the iPads..
Score: 44 Votes (Like | Disagree)

Kylo83
Mines going back, this tech is not great
Score: 37 Votes (Like | Disagree)

the future
The picture in this article is such absolute BS. The display never looks nearly like this IRL. This looks like a severly overexposed image someone took to make the iPad look bad.

xxray
And some of you still kept proclaiming that mini-LED > OLED. :rolleyes:
Score: 23 Votes (Like | Disagree)

DNichter
I don't think I could deal with this. I am happy with my 2018 Pro and will upgrade when they move to OLED. To see this on such an expensive machine is a disappointment.
Score: 20 Votes (Like | Disagree)

I don't know why Apple just didn't use OLED in the first place for the iPads..