As of January 4, 2022, all classic BlackBerry smartphones running versions of BlackBerry OS will no longer work for calls, text messages, data, and emergency functionality, essentially making them unusable. 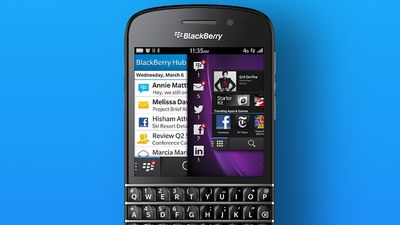 BlackBerry announced the news in September 2020 as part of a broader company shift to focus on enterprise security and solutions. "As another milestone in the BlackBerry journey, we will be taking steps to decommission the legacy services for BlackBerry 7.1 OS and earlier, BlackBerry 10 software, BlackBerry PlayBook OS 2.1 and earlier versions, with an end of life or termination date of January 4, 2022," the company said at the time.

BlackBerry was once a titan of the smartphone industry, but that changed after Apple introduced the iPhone in 2007 and upended the market. A decade after the ‌iPhone‌ launched, BlackBerry's smartphone market share was effectively wiped out.

BlackBerry made a few attempts to reenter the smartphone market over the years by selling Android-based smartphones rather than those running its own operating system. Those devices failed to reach mainstream adoption, however, leading BlackBerry to announce that the company would focus on cybersecurity software for enterprise customers instead of making hardware.

For customers still using classic BlackBerry smartphones, the company is providing some information on how the January 4 decommission may impact you and steps you can take to prepare.

djcerla
Amateur hour is over.

MacFather
It all began here:

NightFox
Empires rise, and empires fall. It's strange to think that one day in the future we'll be talking about the demise of the iPhone.
Score: 23 Votes (Like | Disagree)

Empires rise, and empires fall. It's strange to think that one day in the future we'll be talking about the demise of the iPhone.

Right around the time when we will be talking about the demise of Rolex, Levi’s and Coca Cola. Just because some companies eventually fail doesn’t mean that all of them do. Some companies actually do live to be a hundred. I believe Apple is better suited to do that than any other tech company. But they are not alone, certain others have built up a broad enough portfolio and solid business models that they won’t just be tipped over. Microsoft comes to mind. RIM and Nokia were one-trick ponies. Although at one point it was popular to say that about Apple, they have proven that they are not. The key is in the video linked to above: Put the customer first*, not competitors, not even the product itself.

*”Customer first” does NOT mean always do what the customer wants! It’s about focusing on how to monetize best on the things the customers actually focus on. Apple is better at this than anyone, and if you look at the stock value and still claim otherwise, you are a moron. To bet on Apple failing some time in the future is to make a blind bet that Apple will put a moron in charge. Which is a lot less likely.
Score: 22 Votes (Like | Disagree)

Personally, I know many people who still love Blackberry phones. One of a kind.
Score: 16 Votes (Like | Disagree)

msp3
And nothing of value was lost.
Score: 12 Votes (Like | Disagree)
Read All Comments

Wednesday October 13, 2021 2:12 am PDT by Hartley Charlton
Apple is planning to launch a whole new Apple Music app dedicated to classical music next year, following the acquisition of classical music service "Primephonic." Earlier this year, Apple announced that it had purchased the classical music streaming service Primephonic and would be folding it into Apple Music. Primephonic offered an "outstanding listening experience" with search and...
Read Full Article

Wednesday February 16, 2022 3:31 am PST by Tim Hardwick
Google has announced early access to Chrome OS Flex, a method of replacing the operating system on older PCs and Macs "within minutes" to essentially turn them into Chromebooks. The company is encouraging individuals, schools, and businesses to download Chrome OS Flex so they can "easily try modern computing with cloud-based management" while extending the lifespan of older devices, thereby ...
Read Full Article • 346 comments