2021 was a whirlwind of a year when it came to Apple rumors. Many of the rumors this year turned out to be accurate, like the MacBook Pro getting a notch, but some failed to materialize, like the flat-edged Apple Watch Series 7. 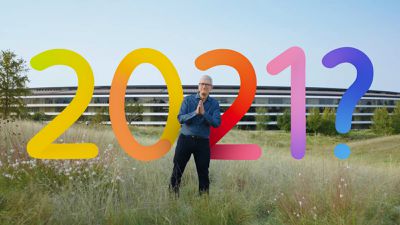 With the year now drawing to a close, we thought it would be fun to look back at six of the biggest Apple rumors of 2021.

1. MacBook Pro With a Notch

Out of all of the rumors that circulated throughout the year, the last-minute rumor suggesting the redesigned 14-inch and 16-inch MacBook Pros would feature a notch stands out prominently. The rumor surfaced just a few days before Apple's highly-anticipated fall event focused on the Mac and it was met with quite a lot of skepticism.

To much surprise, the rumor ultimately came true, with Apple adding a notch to the new MacBook Pros as a means of reducing the bezels around the 14-inch and 16-inch displays.

In early April, Siri leaked that Apple would be holding an event on April 20, a few hours before Apple officially announced the event. When asked when the next Apple event is, Siri responded with "the special event is on Tuesday, April 20, at Apple Park in Cupertino, CA" and said more details were available on Apple.com. While not a "rumor" by definition, it was still a high-profile leak that confirmed Apple's first event of 2021.

As a refresher, Apple's "Spring Loaded" event in April 2021 was packed with new product announcements, including the AirTag, a redesigned 24-inch iMac, a new Apple TV and redesigned Siri Remote, and revamped 11-inch and 12.9-inch iPad Pro models. In 2022, it is likely that Apple will hold another event in the similar March-April timeframe.

In May, Apple leaker Jon Prosser reported that a future Apple Watch, presumed at the time to be the upcoming Apple Watch Series 7, would feature flat edges. The flat-edged design would have been a departure from the curved design of previous models and the first significant redesign to the Apple Watch since its introduction. The rumor quickly became the most talked about feature of the Series 7, when little else was known about what to expect.

To much dismay and mystery, the rumor did not prove to be true. In fact, quite the opposite happened, with Apple emphasizing the Series 7's more rounded corners. While we might never know for sure why the flat-edged Apple Watch Series 7 rumor failed to materialize, there are a few possible explanations.

4. MacBook Pro Gets Its Ports Back

In January of 2021, respected Apple analyst Ming-Chi Kuo dropped a bombshell of a report outlining for the first time what the world could expect from Apple's next-generation MacBook Pros later in the year.

Kuo, some 10 months before the new MacBook Pros officially launched, revealed that they would include an entirely new design with 14-inch and 16-inch sizes, additional ports like HDMI, the removal of the Touch Bar, and the return of MagSafe. Kuo's report was largely corroborated by Bloomberg's Mark Gurman, who revealed that one of the connectivity options returning would be an SD card slot.

These rumors in early January were the first time we had learned new details about the 14-inch and 16-inch MacBook Pros, which Apple announced in October of the year.

In the summer of 2021, credible display analyst Ross Young shared that the upcoming iPad mini would feature an 8.3-inch display with narrower bezels and the removal of the Home Button. Young's report added to information shared by Ming-Chi Kuo and Bloomberg's Mark Gurman, who both claimed the iPad mini would be significantly redesigned.

One of the largest points of contention was whether Apple would include Face ID in the bezel or embed Touch ID into the Side Button, similar to the iPad Air. The later proved to be accurate, with Apple announcing the sixth-generation iPad mini with a new design, USB-C port, Touch ID built into the Side Button, 5G support, and the A15 Bionic chip.

Around three months before its official unveiling, Apple leaker Jon Prosser shared that Apple's first iMac redesign in several years and the first with Apple silicon would feature a lineup of different colors. Prosser followed Bloomberg's Mark Gurman, who was first to report that a new iMac with smaller bezels was in the works.

2021 was a busy year for Apple in which it updated several of its product lines. Looking ahead to 2022, expectations are high for Apple, as the company is rumored to announce its first AR/VR headset, continue its transition to Apple silicon across the Mac lineup, and more. Rumors and reports are always hard to keep track of, but luckily, MacRumors has a comprehensive guide to help get you ready for 2022.

ghanwani
The biggest surprise of 2021 was the purple iPhone 12. No one saw that coming.
Score: 7 Votes (Like | Disagree)

Boris Bronson
There’s a rumour Tim will cut out the praying hands crap in 2022 but it’s not verified at this stage.
Score: 7 Votes (Like | Disagree)

The biggest surprise of 2021 was the purple iPhone 12. No one saw that coming.

bluespark
"Dismay and misery" over the rumored flat-edged watch? Quite the opposite among those of us who like watches.* No one needs their watch to look more device-like, and the flat-edged "design" would have been constantly snagging on clothing. I bought a S7 Apple Watch and would have hard-passed on the rumored design.

*Okay, I'm sure I'm not speaking for everyone. But seriously, that rumored design was ugly and inferior to what we got.
Score: 5 Votes (Like | Disagree)

There’s a rumour Tim will cut out the praying hands crap in 2022 but it’s not verified at this stage.

PLEASE, Tim, cut out that hand stuff during your presentations because it's very noticeable and annoying. You can do it. ?
Score: 4 Votes (Like | Disagree)
Read All Comments