Last week, reputable analyst Ming-Chi Kuo outlined his expectations for new 14-inch and 16-inch MacBook Pro models later this year, including the return of the MagSafe charging connector, the removal of the Touch Bar, a new flat-edged design, and the return of more ports built into the notebooks for expanded connectivity. 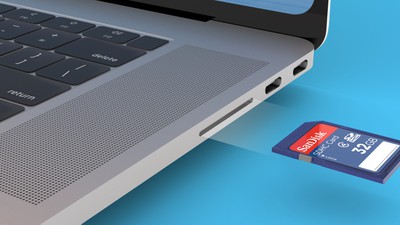 A concept of a modern MacBook Pro with an SD card reader
Kuo did not specify which ports might be making a comeback, but Bloomberg's Mark Gurman today reported that the next MacBook Pro models will feature an SD card reader for transferring photos shot with a digital camera and other files:

The latest MacBook Pro models only have Thunderbolt ports, forcing photographers to use an adapter or dock to gain access to an SD card reader.

In his research note last week, Kuo mentioned that "most users may not need to purchase additional dongles" for the next MacBook Pro, so it is possible that an SD card reader will not be the only port that returns. As recently as 2015, the MacBook Pro was also equipped with an HDMI port and USB-A ports, but it would certainly be surprising to see the latter make a comeback given the tech industry's transition to USB-C.

xnu
So sad that this makes me very excited. Take something away, then make me happy when they give me small things back. It is like an abusive relationship.
Score: 90 Votes (Like | Disagree)

bollman
Either Apple is backtracking all of their decisions since 2016, or they have sent out the specs for the late 2015 MacBooks as decoys to find leaks.
Score: 89 Votes (Like | Disagree)

Either Apple is backtracking all of their decisions since 2016, or they have sent out the specs for the late 2015 MacBooks as decoys to find leaks.

Either that or Engineers have better utility sense than Jony Ive in what customers actually want.

DAC47
Is it a coincidence that Jonny Ive is no longer in charge of design at Apple and useful ports suddenly start returning?
Score: 78 Votes (Like | Disagree)

Why bring back an obsolete slot? We are on CFExpress A and B now, with SD Express coming to fight CFExpress A. SD is dead.

SD still has a life for at least 5 years. Camera manufacturers are being very slow to go all in on CFExpress, and even when they do they keep an SD card as the second slot. And this isn't even getting into the consumer grade cameras or micro SD devices
Score: 34 Votes (Like | Disagree)
Read All Comments

Monday February 8, 2021 10:18 am PST by Hartley Charlton
New MacBook Pro models are expected to arrive later this year with some of the biggest improvements to the product line to date, including some surprising changes, so now is not the best time to buy a new MacBook Pro. With major upgrades expected to key features such as the chipset, display, Touch Bar, charging, ports, and design, customers eyeing a new MacBook Pro may be better off...
Read Full Article • 289 comments

Thursday February 25, 2021 7:48 am PST by Joe Rossignol
Apple plans to unveil new 14-inch and 16-inch MacBook Pro models with Mini-LED-backlit displays in the second half of this year, according to industry sources cited by Taiwanese supply chain publication DigiTimes. The report claims that Radiant Opto-Electronics will be the exclusive supplier of the Mini-LED backlight units, while Quanta Computer is said to be tasked with final assembly of the...
Read Full Article • 216 comments

Thursday January 14, 2021 9:32 pm PST by Juli Clover
Apple is working on two new MacBook Pro models that will feature significant design changes, well-respected Apple analyst Ming-Chi Kuo said today in a note to investors that was obtained by MacRumors. According to Kuo, Apple is developing two models in 14 and 16-inch size options. The new MacBook Pro machines will feature a flat-edged design, which Kuo describes as "similar to the iPhone 12" ...
Read Full Article • 571 comments