Location tracking service Life360 has been selling the precise location data of tens of millions of its users, according to a new report shared by The Markup. 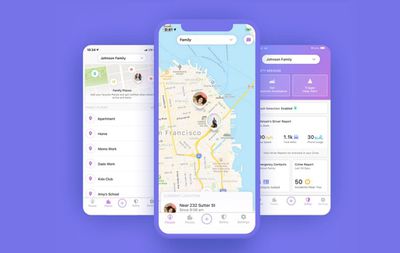 Life360 bills itself as a "family safety platform" app that is meant to allow family members to keep tabs on one another with tracking software that's installed on smartphones, and there are both Android and iPhone apps.

The software is used by 33 million people around the world, and apparently, Life360 is selling location data from both children and adults to a dozen data brokers that then provide the data to other third parties. Two former Life360 employees said that Life360 is one of the largest sources of data in the industry, expressing concern for how the data is used and the lack of safeguards to prevent misuse.

The employees said that Life360 does not take precautions to ensure that location histories cannot be traced back to individuals. The most obvious user identifying information is removed, but Life360 does not aggregate data or reduce precision to preserve privacy.

Life360 CEO Chris Hulls told The Markup that data is an "important part of the business model" that allows Life360's core services to be offered for free.

"We have no means to confirm or deny the accuracy" of whether Life360 is among the largest sources of data for the industry, Life360 founder and CEO Chris Hulls said in an emailed response to questions from The Markup. "We see data as an important part of our business model that allows us to keep the core Life360 services free for the majority of our users, including features that have improved driver safety and saved numerous lives."

An engineer who worked for X-Mode, a location data provider, said that the raw location data received from Life360 was one of its "most valuable offerings" because of the "sheer volume and precision of the data." Life360 has sold data to X-Mode, Cuebiq, Arity, Safegraph, and others that provide location data to other services. Life360 discloses some of the data sharing in its privacy policy, but there are companies that it does not list.

Data partners are only publicly disclosed when partners request transparency or there's "a particular reason to do so," Hulls said. He did confirm that X-Mode buys data from Life360 and that it is one of "approximately one dozen data partners." Hulls added that the company would be supportive of legislation that would require public disclosure of such partners.

Some of the data providers only use aggregated location information sourced from Life360. Cuebiq, for example, users aggregated data to track COVID-19 "mobility trends" with the CDC. X-Mode has provided the Life360 data to the U.S. Department of Defense, and SafeGraph has also provided it to the CDC.

Life360 does make it clear in the fine print of its privacy policy that data is sold, but people may not be aware of how the data is distributed after it's provided to data brokers. "Families probably would not like the slogan, 'You can watch where your kids are, and so can anyone who buys this information,'" Duke Tech Policy Lab fellow Justin Sherman told The Markup. There is also an opt-out feature, but not all users may be aware of it.

Life360 is an app that's primarily used by parents to track their children and teenagers, and it has raised privacy concerns for its invasiveness. Life360 has said that it does not share the location data of users under 13, but data from children over 13 and adults is fair game.

Tile, a company that makes Bluetooth-based trackers that compete with Apple's AirTags, is being acquired by Life360 in a deal that's worth $205 million. Life360 says that Tile will allow it to provide an "all-encompassing solution" for locating pets, people, and things with the Tile purchase, a claim that is alarming given the privacy concerns raised in today's report.

More information on Life360's user tracking and how the data is used can be found in The Markup's full report.

Hulls provided the full quote, which is as follows:

"We have no means to confirm or deny the accuracy of that statement. However, the vast majority of mobile applications - including some which are many times larger than Life360 - collect, use, and share data in various ways. Our level of participation in the ecosystem is likely commensurate with the size of our user base. As The Markup itself has reported, there are almost two billion devices that are connected to the mobile phone location data market. Based on this data, at maximum, with approximately 30 million active users, we account for a very small portion of the overall market.

Similarly, from a revenue perspective, we are almost certainly one of the smaller companies involved in the broader industry as the market is estimated to be over $10 billion and we generate approximately $20 million."

nathan_reilly
when its free, you are the product!
Score: 62 Votes (Like | Disagree)

Location tracking service Life360 has been selling the precise location data of tens of millions of its users...

Think|Different
You could tell you couldn't trust them by the name "Life360."
Score: 43 Votes (Like | Disagree)

Joe_
If this was Apple, it would be a worldwide news story covered by every tech publication ever, class action lawsuits, and location gate hashtags trending for weeks on Twitter.

djcerla
You pay AND you are the product.

iLoveDeveloping
Another reason to use AirTags!
Score: 27 Votes (Like | Disagree)
Read All Comments

Monday January 30, 2023 12:55 am PST by Tim Hardwick
Apple will launch a foldable iPad with a carbon fiber kickstand sometime next year, according to analyst Ming-Chi Kuo. Subscribe to the MacRumors YouTube channel for more videos. In a series of tweets, Kuo said he expects an "all-new design foldable iPad" to be the next big product launch in the iPad lineup, with no other major iPad releases in the next nine to 12 months. The analyst said he...
Read Full Article • 215 comments