Amid a heightened amount of scrutiny and tension surrounding the App Store and how users download and install apps on the iPhone, Apple CEO Tim Cook said today that customers who wish to sideload apps should consider purchasing an Android device as the experience offered by the ‌iPhone‌ maximizes their security and privacy. 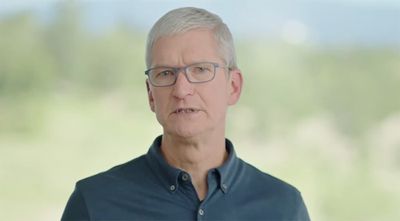 Speaking at The New York Times "DealBook" summit, Cook said that customers currently already have a choice between wanting a secure and protected platform or an ecosystem that allows for sideloading. "I think that people have that choice today, Andrew. If you want to sideload, you can buy an Android phone." Cook drew the comparison of sideloading to a carmaker selling a car without airbags or seatbelt, saying it would be "too risky."

I think that people have that choice today, Andrew, if you want to sideload, you can buy an Android phone. That choice exists when you go into the carrier shop. If that is important to you, then you should buy an Android phone. From our point of view, it would be like if I were an automobile manufacturer telling [a customer] not to put airbags and seat belts in the car. He would never think about doing this in today's time. It's just too risky to do that. And so it would not be an iPhone if it didn't maximize security and privacy.

Sideloading, which would allow users to download and install apps directly onto their ‌iPhone‌ from the open internet, has become a hot topic in recent months, with Cook now weighing in. Earlier this week, Apple's senior vice president of software engineering, Craig Federighi, said that sideloading is a "cybercriminal's best friend," highlighting the dangers that may be presented to customers if offered the freedom to install apps from anywhere on the web.

In a paper published in October, Apple shared some facts about the security and privacy of the ‌iPhone‌ compared to the Android ecosystem. In the paper, Apple said that studies have shown that Android smartphones have been attacked by mobile malware between 15 and 47 times more than malware targeting the ‌iPhone‌. "This is closely linked to sideloading," the paper added.

Speaking generally on privacy, Cook was questioned on recent reporting revealing that Facebook, Google, Snapchat, and others have lost almost $10 billion in revenue this year due to Apple's App Tracking Transparency prompt, which requires developers to ask for a user's consent before tracking them. Declining to comment on the specific numbers, Cook did repeat that Apple believes privacy is a fundamental human right.

I don't know about the estimates, Andrew, so I can't testify to those kind of numbers, but I think that from our point of view, privacy is a basic human right. And the people that ought to be deciding whether to data share is the person themselves. And so what we have been all about is putting the power with the user. We are not making the decision, we are just simply prompting them to be asked if they want to be tracked across apps or not. And of course, many of them are deciding no and never wanted to be, it's just that they did not have a choice before. And so I feel really good and I'm getting great feedback from users about having the choice.

Apple is in multiple investigations and battles around the world regarding the ‌App Store‌, with the one most likely to produce drastic change being South Korea. Last month, the country passed new rules prohibiting platform owners from limiting developers to using only a single payment method for in-app purchases.

The ‌App Store‌'s in-app purchase method, which developers are required to use for digital purchases made within apps, gives Apple a 15-30% commission on all purchases made. Cook noted today that Apple has only ever lowered the commission, never increasing it. Nonetheless, the new law in South Korea would represent a significant turning point for the ‌App Store‌ if fully enacted. The ‌App Store‌ operates under a single global set of rules, and any change in one jurisdiction is applied globally for all developers.

ouimetnick
Automakers did fight against including seatbelts and airbags. Drivers could become entangled in a seatbelt trapped inside of a burning vehicle…

The real reason automakers resisted is because it would increase vehicle production costs.

Similarly with Apple, allowing side loading would put a massive dent in their services revenue. Cook is correct about privacy and security, but there’s more to the story that he’s not going to admit to.
Score: 34 Votes (Like | Disagree)

Denzo
Can you imagine having a product, that your company sells, and a whole bunch of people are telling you what you allowed and not allowed to put on it?
Am I allowed to tell LG to use android instead Web OS? Can I ask Samsung to not allow sideloading? Can I ask Toyota to install CarPlay access? WTF is going on here
Score: 30 Votes (Like | Disagree)

RyanNSkolnick
Objectively true. Some people view their phones like toys, some do real serious work on them and can't afford security risks. I don't care about the ability to side load, I care about the device that has so much of my highly sensitive info on it being as secure as possible. Forcing Apple to allow side loading removes that choice from the market.
Score: 29 Votes (Like | Disagree)

randfee2
I don't see the validity of this statement, I think it's a cop-out trying to hide the real reason.
Abusing people's desire for security as a false pretend to maximize Apple's profit!

Users who are not sideloading apps on iOS would be just as safe as they are now, how is their safety affected when other users sideload? Exploits of iOS are constantly found anyways, jailbreaks keep happening. Whoever wants to attack non-jailbreakers/sideloaders won't gain much here, at least not in comparison to the gains of the iOS users who want to sideload! If the OS is truly sandboxed well, where is the harm?
These devices (iPhones) are not a connected server cluster, they're individual devices!!!

Quick question: Why would it be unsafe on phones when it's normal for computers?
Take a guess :p iOS basically is a variant of MacOS, they claimed so at least (LOL). Does that mean that they do sub-par security for iOS, maybe get some devs from the MacOS team over to help? LMAO
I can imagine the entire Apple board of directory having dreamt of forbidding software installs on Mac computers just as much as they did on iOS for years now.
In the end, it's just common law. Everybody is used on it on iOS, so most people believe this makes sense and must remain like it is.... think again!

I predict, Apple will lose this argument in court and will have to change their stance on this within the next few years.

____
edit
interesting to see, majority opts for the "courage" option of allowing what has been normal on any computer ever since they were invented.... so Apple, do the same for these pocket computers please!

Saturday February 4, 2023 10:05 am PST by Eric Slivka
Online retailer TigerDirect has slashed pricing on the M1 iPad Air in several colors, offering the base 64GB configuration for just $313.99 in Purple and Pink. Note: MacRumors is an affiliate partner with TigerDirect. When you click a link and make a purchase, we may receive a small payment, which helps us keep the site running. That's a savings of 48% compared to Apple's normal $599.00...
Read Full Article • 361 comments

Sunday February 5, 2023 6:07 am PST by Joe Rossignol
Apple has discussed selling a new top-of-the-line iPhone alongside the Pro and Pro Max models in 2024 at the earliest, according to Bloomberg's Mark Gurman. Based on this timeframe, the device would be part of the iPhone 16 lineup or later. In a September 2022 edition of his weekly "Power On" newsletter, Gurman said there was "potential" for an iPhone 15 Ultra to replace the iPhone 15 Pro...
Read Full Article • 320 comments