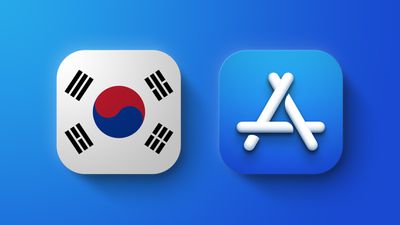 The bill was originally supposed to be voted on yesterday, however, more urgent matters presented to South Korea's National Assembly meant the bill was postponed. The bill is an amendment to the existing Telecommunications Business Act. It aims to ban Apple and Google from unfairly exploiting their market position to "force a provider of mobile content, etc., to use a specific payment method."

Apple's App Store has been under increased scrutiny in recent months. South Korea's bill represents the first time any government has taken substantive legislative steps to crack down on the platforms. Lawmakers, developers, and others have called for increased regulation of both Apple and Google's app distribution services, noting the companies' potential to engage in anti-competitive behaviors.

Under the now passed bill, Apple in South Korea will no longer be permitted to limit developers to only use its in-app purchasing system, which grants it a 15% to 30% commission for all purchases made. The commission has been under the spotlight ever since game developer Epic Games attempted to bypass Apple's ‌App Store‌ policy by implementing a direct payment method for users last year.

Apple has called its in-app purchasing system a safe and secure way to allow users to purchase digital goods within apps, while some have called the company's commission unfair. As we noted yesterday, Apple operates its ‌App Store‌ under one set of rules applied to developers internationally. While South Korea's bill is specific to users in the country, it may have a domino effect worldwide.

Besides a 15% to 30% commission on all in-app digital purchases made, Apple charges developers a $99 annual fee to be part of its Apple Developers program. Those two revenue streams are just a few ways Apple maintains a profit for the ‌App Store‌. In the third quarter of this year, the tech giant reported an all-time high revenue record of $17.5 billion in its services business, including the ‌App Store‌.

Update: In response to the bill passing, Apple has provided MacRumors with the following statement. The statement, the same one used previously when asked on the legislation, says that user trust in the ‌App Store‌ will decrease as a result of the bill.

The Telecommunications Business Act will put users who purchase digital goods from other sources at risk of fraud, undermine their privacy protections, make it difficult to manage their purchases, and features like “Ask to Buy” and Parental Controls will become less effective. We believe user trust in App Store purchases will decrease as a result of this legislation — leading to fewer opportunities for the over 482,000 registered developers in Korea who have earned more than KRW8.55 trillion to date with Apple.

dandbj13
I strongly suspect this push to change Apple's App Store is not coming from Apple product users. It is coming from people on competitive platforms who want to take away Apple's competitive advantage. Despite that, Apple cannot just pull out of territories because more of these laws will be passed in other places. What they need to do is start trialing some of their countermeasures they have been working on for this eventuality. Developers believe they have won a free ride. I rather suspect they are in for a very different kind of ride.
Score: 33 Votes (Like | Disagree)

Bye-bye, South Korea.
Now this virus has been released, let's see if other countries catch it.
As a customer, I don't want a hundred shops and pay-systems, I need one that has everything.
I nerver had a problem to be "forced" to Apple's in-App-System.
More chaos forced by lawmakers, silly.

Nothing is stopping you continuing to use Apple's payment system.

Just like nothing is stopping you using Safari, Pages, Calculator or any other app/service offered by apple.
Score: 29 Votes (Like | Disagree)

so what is the alternative? Apple and Google charging the developer for posting an app in their stores? I understand that the current system is not great, but I do want to have a store system, where there is some sort of oversight of the apps available.

ghanwani
When I saw the post about the delay yesterday, I didn’t think it was only a 24 hour delay.
Score: 22 Votes (Like | Disagree)

cdarlington1
Apple will still make their money from offering the platform to developers. If they can’t get paid from a % of purchases, they’ll just bill a different way. As they should.
Score: 20 Votes (Like | Disagree)

jonnysods
So it begins. I wonder what the future holds for Apple. Its a much easier road being the underdog, than being the top dog.
Score: 19 Votes (Like | Disagree)
Read All Comments