Apple today announced its long-awaited major redesign for the MacBook Pro, featuring configurations with the M1 Pro and M1 Max chip, a mini-LED display with ProMotion, an HDMI port and SDXC card reader, charging with MagSafe 3, a notch housing a 1080p webcam, and more. 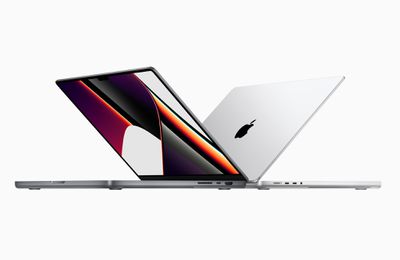 The MacBook Pro features significantly reduced display borders that are 3.5mm thick, with a notch out of the top of the display for the webcam. The webcam now offers a 1080p resolution with a wider aperture, a larger image sensor, and benefits from an improved image signal processor.

The MacBook Pro now features magnetic charging with ‌MagSafe‌ 3, which gives the device fast charging for up to 50 percent charge in 30 minutes. It remains possible to charge using the Thunderbolt ports. When playing back video, the 14.2-inch model offers up to 17 hours of battery life, while the 16.2-inch model can deliver up to 21 hours of video playback.

The redesigned MacBook Pro features configurations with two new Apple silicon chips. Apple's The ‌M1 Pro‌ chip is a scaled-up, more powerful variant of the M1 chip. The ‌M1 Pro‌ chip features an 8-core or 10-core CPU, 16-core GPU, a more capable Media Engine, more Thunderbolt controllers, support for up to 32GB of unified memory, and more. The ‌M1 Max‌ chip features the same 10-core CPU as the ‌M1 Pro‌, but includes a 24-core or 32-core GPU with support for up to 64GB of unified memory.

The new MacBook Pro is available to pre-order today, with the first orders arriving to customers next week.

TheYayAreaLiving ?
The official notch is here!

JMO1
“It also looks good in dark mode, which our pros love” = yeah because it looks terrible not in dark mode.
Score: 37 Votes (Like | Disagree)

EDIT: Apparently the new MBP are only so slightly thicker

falainber
And we thought the notch would be used to get rid of the bezels. Instead we get the notch and the bezels!
Score: 30 Votes (Like | Disagree)

Lukkee24
What the notch is this
Score: 27 Votes (Like | Disagree)
Read All Comments