It feels like Apple's iPhone event just ended, but it's already time to do it all over again as Apple has announced a virtual media event for this Monday, October 18. 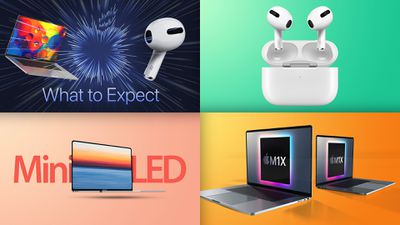 Even at this late date, rumors about the MacBook Pro are still coming in one after another, and we're also hearing from sources claiming the third-generation AirPods will be making an appearance at the event, so read on below for all of the latest details!

After hosting its iPhone 13, Apple Watch Series 7, and iPad event in September, Apple has announced that it will be hosting a second fall event on Monday, October 18 at 10 a.m. Pacific Time. The virtual event will be streamed on Apple's website and on YouTube, and we've got full details on how and when to watch, wherever you're located.

Rumors widely suggest the event will revolve around new Macs, including redesigned 14-inch and 16-inch MacBook Pro models with a faster version of the M1 chip, mini-LED backlit displays, and more. It's possible that third-generation AirPods may also be unveiled. For a full rundown on what we're expecting to see at Monday's event, check out our overview guide.

Young has a good track record, and if this rumor proves to be accurate, perhaps Apple will use ProMotion branding for the displays like it did for iPhone 13 Pro models, which also support up to a 120Hz refresh rate.

Another display-related rumor that seems incredibly sketchy at first glance claims that the MacBook Pro displays will have a notch similar to recent iPhones. A closer look at previously leaked display resolutions for the upcoming MacBook Pro models suggests there may actually be something to this rumor.

AirPods 3 Ready to Launch and Likely to Be Announced at Apple Event Next Week, Analyst Says

We've been hearing about updated AirPods for quite some time now, with rumors originally stating they would debut earlier in 2021. Multiple sources are reporting that Apple is ready to launch them at any moment, and Monday's event is a prime opportunity.

Wedbush analyst Dan Ives says that according to his supply chain checks, the new AirPods have already been manufactured and so he expects them to be announced on Monday. Similarly, a leaker on Weibo who accurately predicted Apple would introduce the ninth-generation iPad at last month's event also says the new AirPods are coming on Monday.

Just ahead of Apple's event next Monday, a leaker known as "dylandkt" has shared some potential features and specs for the notebooks on Twitter.

According to his tweets, the new MacBook Pro models will start with 16GB of RAM and 512GB of storage, and he also reiterated his previous claim that the notebooks will sport an upgraded 1080p webcam, following in the footsteps of the 24-inch iMac earlier this year.

In addition to a faster version of the M1 chip and mini-LED backlit displays, there are several other new features and changes rumored for the next MacBook Pro models, so make sure to check out our breakdown of everything rumors say we can expect.

We've also put together a guide with everything we know about Apple's so-called "M1X" chip that is rumored to power the next MacBook Pro models.

The Apple Watch Series 7 has officially launched, with the first orders making their way into customers' hands. Supplies remain extremely tight as expected, thanks to early production difficulties, with most new orders not shipping until November or even December.

Ahead of the launch, reviews were shared by media outlets and YouTube channels. In addition to rounding up Apple Watch Series 7 video reviews and unboxings, we've highlighted some written reviews and put together our own quick hands-on video with the new watch.

We also shared an image that provides a side-by-side look at the Apple Watch Series 7's larger display vs. the Series 6.

These are just stupid marketing terms and have no relevance whatsoever.

I agree but the relevance is that the higher number is newer than the lower number…
Score: 1 Votes (Like | Disagree)

Still no proof it will be referred to as a M1X. But its design is likely to suggest how Apple Silicon will evolve.

I doubt that Apple will use the “x” nomenclature… but we’ll find out Monday
Score: 1 Votes (Like | Disagree)

When was the last time you were impressed by an Apple event? We’ve had so many disappointments that we’ve only had a few. The 2020 M1 PCs and the 2018 Mini event. Otherwise Apple has misfired.

Mimiron
Is there a way for us to have the new watch faces on older devices? There's no reason to upgrade from my Ceramic 5 but I would love new watch faces. Thanks for the answer.
Score: 1 Votes (Like | Disagree)

dogslobber
When was the last time you were impressed by an Apple event? We’ve had so many disappointments that we’ve only had a few. The 2020 M1 PCs and the 2018 Mini event. Otherwise Apple has misfired.
Score: 1 Votes (Like | Disagree)

When was the last time you were impressed by an Apple event? We’ve had so many disappointments that we’ve only had a few. The 2020 M1 PCs and the 2018 Mini event. Otherwise Apple has misfired.

Yes, and by the looks of it they look to be correcting 5+ years of misfires with the M1X MBP. Are you not excited for this?
Score: 1 Votes (Like | Disagree)
Read All Comments

Tuesday October 12, 2021 12:43 pm PDT by Juli Clover
With the MacBook-centric Apple event now set for Monday, October 18, leakers are beginning to share a few new details that we haven't previously heard about the machines. According to Dylandkt, the base 14 and 16-inch MacBook Pro models will feature 16GB RAM and 512GB of storage space, which is in line with the current high-end 13 and 16-inch MacBook Pro options. As he has said previously,...
Read Full Article • 338 comments

Tuesday October 12, 2021 9:07 am PDT by Juli Clover
Apple today announced that it will be holding a special event on Monday, October 18 at 10:00 a.m. Pacific Time. The event is set to take place at the Steve Jobs Theater on the Apple Park campus in Cupertino, California, and it will once again be a digital only event. Subscribe to the MacRumors YouTube channel for more videos. When there are a lot of products coming in the fall months, Apple...
Read Full Article • 534 comments

Tuesday October 12, 2021 10:01 am PDT by Juli Clover
Apple today announced an upcoming "Unleashed" event for Monday, October 18, and the event is expected to focus on the MacBook Pro, which is long overdue for a refresh. We've been hearing endless exciting rumors about the new machines, but this morning, display analyst Ross Young shared something new - the upcoming MacBook Pro models could feature a 120Hz refresh rate. In a Twitter...
Read Full Article • 155 comments

Thursday October 14, 2021 7:41 am PDT by Hartley Charlton
With Apple's redesigned MacBook Pro believed to be just days away from being announced at Apple's "Unleashed" event, we have compiled all of the coherent rumors from our news coverage to build a full picture of the features and upgrades coming to the company's highly-anticipated new laptops. It is worth noting that the rumors below are aggregated from our coverage from a wide range of...
Read Full Article • 279 comments