Ahead of Monday's Apple event, which is expected to include the much-awaited launch of brand new 14 and 16-inch MacBook Pros, Intel is continuing its long-running campaign to try and convince Mac users to switch to Intel-based PCs. 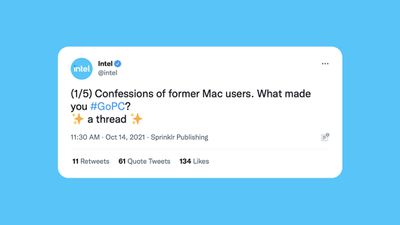 Last week, Intel released a video as part of its PC vs. Mac campaign that featured "Apple fans" introduced to different Intel computers and all of their features. During the four-minute video, Intel attempted to paint Apple consumers as oblivious to "innovations" made by companies besides Apple, including "touch screen" laptops.

Continuing its streak, yesterday, the official Intel account tweeted out, "Confessions of former Mac users. What made you #GoPC?" Instead of former Mac users engaging with the tweet on reasons they switched to PC, the tweet instead includes replies of current Mac users poking fun at Intel's "desperate" marketing attempts. One comment reads, "Just admit it: you're just pissed that Apple ditched you and designed a way better processor by themselves."

Other replies include Apple users trolling Intel, with one stating "You're not invited" with a picture of the upcoming "Unleashed" event invitation. One reply, in Intel's defense, says that Apple is "a low performance luxury brand with overpriced hardware and a lesser ecosystem because its closed."

Ironically, while Intel goes on the defense, Apple still sells Mac computers powered by Intel processors. After Monday's "Unleashed" event, the higher-end MacBook Pro will no longer be Intel-based and will officially switch to Apple silicon, but other Macs such as the 27-inch iMac and Mac Pro still feature Intel processors.

Apple officially embarked on its transition to Apple silicon in November of last year, and the company is expected to fully move all of its Mac computers away from Intel next year.

CalMin
Intel has an idiot in the marketing department.

[LIST=1]
* Apple is still a customer. Although I suspect not so much after Monday.
* intel outsells Apple. it is marketing 101 to never mention your secondary competition.
* People don’t choose Mac or PC based on the CPU.
Score: 63 Votes (Like | Disagree)

ashdelacroix
No one in the history of the world (with full sanity) has gone from Mac to PC, unless forced.
Score: 53 Votes (Like | Disagree)

Sullivan0930
Intel has really been taking shots at Apple lately, meanwhile AMD is their real competition. Apple just stopped using them, AMD is their windows counterpart and Ryzen is on the rise! I know my next windows machine will be AMD.
Score: 36 Votes (Like | Disagree)

Blackstick
They're like a bitter ex not handling the separation well at all. If they were a person, I'd send them to therapy. As a company, just pisses off their shareholders.

Stop worrying about Apple, it's over... go work on the next awesome and prove them wrong, Intel.
Score: 34 Votes (Like | Disagree)

Butler Trumpet
[S]Michael Ginsberg[/S] Intel: I feel bad for you.

[S]Don Draper[/S] Apple: I don't think about you at all.
Score: 30 Votes (Like | Disagree)
Read All Comments

Thursday September 29, 2022 12:38 pm PDT by Juli Clover
Tony Blevins, Apple's vice president of procurement, is set to depart the company after he made a crude comment about his profession in a recent TikTok video, reports Bloomberg. Blevins was in a video by TikTok creator Daniel Mac, who was doing a series on the jobs of people he spotted with expensive cars. After seeing Blevins in an expensive Mercedes-Benz SLR McLaren, Mac asked Blevins what ...
Read Full Article • 697 comments