Despite speculation that the Apple Watch Series 7 may be thinner or thicker than its predecessors, the latest models have the same thickness as the Series 6. 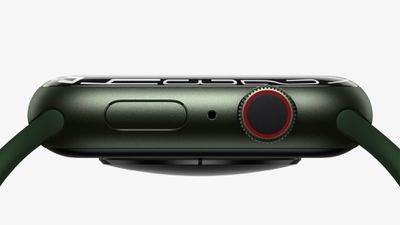 Now that Apple's official specification pages have gone live, it has been confirmed that the Apple Watch Series 7 models are 10.7mm thick, which is the same as the Series 6 models that have today been discontinued. Both the 41mm and 45mm casings have the same thicknesses.

While early specification documents obtained by MacRumors revealed many aspects that Apple did not clarify during the announcement of the device, such as the S7 chip, the thickness and exact dimensions were unknown until today.

Alleged renders that depicted an Apple Watch Series 7 with squared-off edges suggested that the new model would be 1.7mm thinner, with an overall thickness of 9mm. Contrastingly, Bloomberg's Mark Gurman said that the Series 7 would be "slightly thicker overall" than the Series 6. Once it was announced, promotional images of the Apple Watch Series 7 also fuelled speculation that the new models may be thinner. It is now clear that none of these rumors turned out to be correct.

Apple says that the casings of the Apple Watch Series 7 have been refined with softer, more rounded edges, but overall the dimensions are very similar to the Series 6. The Apple Watch Series 7 is available in new 41mm and 45mm size options that are 1mm taller than the 40mm and 44mm options of previous generations.

The smaller 41mm Series 7 model is also 1mm wider than the 40mm Series 6 model, but the 44mm and 45mm models have the same width. Bands from older Apple Watch models continue to be functionally compatible with the Series 7, but these dimensions could indicate that older 38mm or 40mm bands used with the 41mm model may not be completely flush with the casing, although the curvature of the casing may mitigate this issue. This would not be a potential problem with the larger 45mm model since it has the same width as the 44mm model.

Psychicbob
*paints over the 6 and scratches a 7 on the box* There ya go. They’ll never notice
Score: 21 Votes (Like | Disagree)

*paints over the 6 and scratches a 7 on the box* There ya go. They’ll never notice

Im upgrading from a Series 2. Call it what you want, its an upgrade for many. Certainly not for those with a 6, but for everyone else its a 7.
Score: 20 Votes (Like | Disagree)

TheYayAreaLiving ?
Every leaker got the rumors wrong this year for Apple Watch. More to come…
Score: 18 Votes (Like | Disagree)

Despite Apple’s attempts to convince you how they revolutionised design processes, all they actually did is add a bit more curve to the case and display glass to fit in a slightly bigger screen
Score: 14 Votes (Like | Disagree)

Very often things are a matter of opinion and there’s no truly right or wrong answer.

But what you just posted is undeniably wrong.

Series 5 and Series 6 added actual new features. The 5 added an always on OLED screen and magnetometer. The 6
added a blood oxygen sensor, always on altimeter, and ultra-wideband.
Score: 10 Votes (Like | Disagree)

Palliser
Going from a 3 to the 7. Going to be quite the upgrade for me. Not everyone upgrades every year or even two years.
Score: 7 Votes (Like | Disagree)
Read All Comments