Apple's highly anticipated "California Streaming" event on Tuesday had an interesting mix of expected and unexpected news, including the iPhone 13 lineup that largely followed expectations and the Apple Watch Series 7 that didn't get the expected flat-sided redesign but otherwise matched up with rumors pretty well. 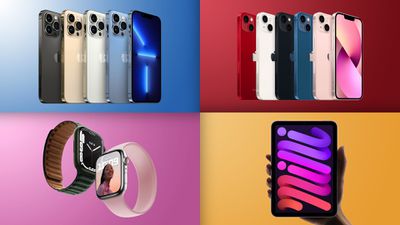 On the more unexpected front, we got updates to the iPad mini and entry-level iPad, something most people weren't expecting until a second autumn event in October or November. We also didn't get the third-generation AirPods, which were rumored but fairly uncertain about heading into the event.

For a look at Tuesday's biggest announcements, check out our 7-minute recap video and associated article that links out to all of our coverage from event day.

Apple on Tuesday announced the iPhone 13 and iPhone 13 mini, both featuring a smaller notch, repositioned rear cameras, improved performance, and more while maintaining the same 6.1-inch and 5.4-inch sizes of their respective iPhone 12 predecessors.

Pre-orders are now underway ahead of a launch on Friday, September 24, although shipping times for many models and some Apple Card users experienced difficulties trying to place orders as they went live.

In additon to the iPhone 13 and iPhone 13 mini, Apple on Tuesday also announced the iPhone 13 Pro and ‌iPhone 13‌ Pro Max, featuring brighter Super Retina XDR displays with ProMotion, improved rear cameras, a more powerful variant of the A15 Bionic chip, up to 1TB of storage, a new Sierra Blue color option, and more.

Both devices sport the A15 Bionic chip with a six-core CPU and a five-core GPU for a significant performance improvement. This variant of the A15 chip contains one extra GPU core than the ‌iPhone 13‌ mini and ‌iPhone 13‌'s A15 chip.

Pre-orders for the Pro models are also underway ahead of their September 24 launch, and if you're having trouble deciding which model to get, we have a buyer's guide comparing the regular and Pro lineups.

What we didn't expect is that the design is quite similar to the Series 6 and other recent models, with smooth, rounded edges rather than the flat-edged redesign that had been rumored by several prominent sources.

You'll also have to wait a while to get your hands on the new Apple Watch, as Apple has said only that it will be available "later this fall." Recent reports indicated that Apple was having trouble ramping up mass production of the new models, and that's almost certainly the reason for Apple's vague launch timeframe.

We heard a number of rumors about a redesign for the iPad mini that would bring it more in line with the iPad Air, and that's exactly what we got Tuesday with the sixth-generation model.

The new iPad mini features a larger 8.3-inch display that largely covers the front of the device, Touch ID on the power button rather than having a Home button, a USB-C port instead of Lightning, and support for the second-generation Apple Pencil.

Orders for the new iPad mini are available now, with a launch coming on Friday, September 24.

While it didn't see as big an overhaul as its smaller sibling, the entry-level 10.2-inch iPad did receive an update on Tuesday, upgrading to an A13 Bionic chip offering up to 20% faster performance, a True Tone display, an improved front camera, and more.

The new ‌iPad‌ features an upgraded 12MP ultra-wide front camera with Center Stage, which uses machine learning to automatically detect people in the frame, panning and zooming to keep them in view during FaceTime calls. The feature recognizes when other people join or exit a call, adjusting the camera position to fit everyone in.

Orders for the new iPad are available now, with a launch coming next week on Friday, September 24.

We haven't yet received an official launch date for macOS Monterey, but it appears likely we'll have a Mac-focused media event in about a month or so, and we'll likely hear more about Monterey then, if not sooner.

Mrjetsondc
I got the Pro at 505am on launch. I don’t think I’ve ever bought anything at launch. I traded in my 11.

What I find interesting is that I promised myself I would never buy a 1k dollar phone.

but here I am.

What I find interesting is that I promised myself I would never buy a 1k dollar phone.

but here I am.

it's ok. adjust your promise of $1k limit by inflation and you're good.
Score: 7 Votes (Like | Disagree)

Octopuss
I stick to my 11 pro max for at least another year, nothing to see here
Score: 5 Votes (Like | Disagree)

TheYayAreaLiving ?
We know Tim Cook got paid this weekend. His pockets are full. This is probably his favorite weekend too.

Apple_Robert
I am happy. The iPhone mini survived another year. :D
Score: 4 Votes (Like | Disagree)

iapplelove
I won’t even ditch my broken iPhone X for the new offerings. Yawn
Score: 3 Votes (Like | Disagree)
Read All Comments

Friday October 1, 2021 6:38 am PDT by Hartley Charlton
Update: Apple has announced that Apple Watch Series 7 pre-orders will begin on Friday, October 8, checking off one of the items we thought we might see at an October Apple event. Following Apple's "California Streaming" special event in September, which saw the unveiling of the new iPad mini, Apple Watch Series 7, and iPhone 13 lineup, the company is broadly expected to host another event this ...
Read Full Article • 157 comments