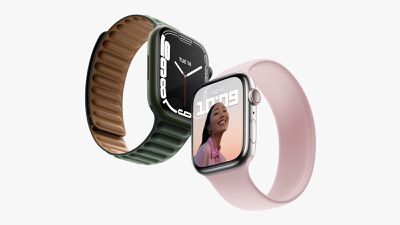 The Series 7 comes in 41mm and 45mm size options, up from 40 and 44mm of previous models, and features a new casing that has a flat base and "softer, more rounded corners," while the screen uses 50% stronger crack-resistant crystal, its strongest ever. Apple says the narrower borders allow the display to maximize screen area, while minimally changing the dimensions of the watch itself.

The touch sensor has been integrated into the OLED panel to reduce display thickness and borders, and Apple says a "subtle wraparound effect" is created by refracted light at the edge of the display for a more seamless integration with the case. Aside from offering greater readability and ease of use, the Series 7 also includes two unique watch faces — Contour and Modular Duo — designed specifically for the new device.

Apple says it has completely reengineered the display to reduce borders by 40%, which allows for nearly 20% more screen area than the series 6, and over 50% more screen area than Series 3. The screen borders alone are just 1.7 mm — 40 percent smaller than those on Apple Watch Series 6. Apple also says the always-on display is 70% brighter indoors when your wrist is down.

The ‌Apple Watch Series 7‌ also has an IP6X certification, which makes it dust and water resistant, with a WR50 swim proof resistance.

Apple says the Series 7 charges up to 33% faster than previous models, thanks to an updated charging architecture and fast-charging USB-C cable, allowing it to go from zero to 80% charge in 45 minutes, providing eight hours of sleep tracking.

Interface wise, Apple says buttons have been redesigned to take advantage of the larger display, while a new QWERTY keyboard lets you tap or slide from letter to letter with QuickPath.

‌Apple Watch Series 7‌ prices start from $399 and will be available later this fall.

noone
The case doesn't look very flat to me.
Score: 98 Votes (Like | Disagree)

julesme
Where's the redesign? This is maybe the biggest leak "miss" I can remember in recent years.
Score: 51 Votes (Like | Disagree)

Just sayin...
“Same great battery life” - nothing great about it. Mine quits before the day is over.
Score: 46 Votes (Like | Disagree)

Liam555
I'm glad they didn't go for that ugly flat design. I don't mind it with phones and ipads, but not on a watch.
Score: 42 Votes (Like | Disagree)

willzyx
So it's not a flat screen like all these analysts predicted. Another proof that we should stop listening to these "analysts". Most accurate info always comes from random leakers on Twitter.
Score: 40 Votes (Like | Disagree)
Read All Comments

Tuesday September 14, 2021 12:10 pm PDT by Sami Fathi
Thanks to the larger display on the Apple Watch Series 7, users can now use a full keyboard right on their wrist. Users will be able to tap or slide across letters to type, in which case watchOS will use "machine learning to predict the word you’re typing." The new Apple Watch Series 7, which comes in larger 41mm and 45mm sizes, features larger displays compared to the Series 6 thanks to...
Read Full Article • 57 comments