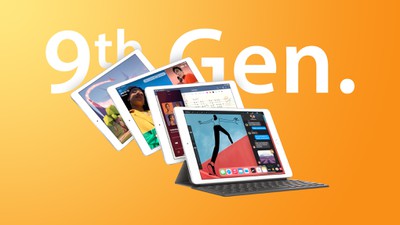 According to the Weibo account @PandaIsBald, who has shared information regarding iPhone 13 pre-order dates in the past, Apple plans to release the new ninth-generation ‌iPad‌ during or possibly after today's event.

The new ‌iPad‌, as previously reported, is expected to feature a 10.5-inch display, improved performance, and like the current model, it's expected to be tailored towards students and customers wanting an affordable ‌iPad‌ option.

The event is expected to headline the ‌iPhone 13‌, Apple Watch Series 7, and possibly the third-generation AirPods. While those products are likely to be featured during the event itself, Apple may decide to release other products via press releases.

Bloomberg's Mark Gurman this week indicated that Apple is planning a second event for this fall that will focus purely on the iPad and Mac. The ninth-generation ‌iPad‌ is one of two ‌iPad‌ updates expected before the end of the year. The other update, a new and redesigned iPad mini, is the more significant refresh, making it conceivable that Apple could dedicate its latter event to the ‌iPad mini‌ while releasing the more incremental baseline ‌iPad‌ refresh sooner.

As noted by the website AppleTrack earlier today, the current eighth-generation ‌iPad‌ is still unavailable in several retail stores in the United States. Shortages for the ‌iPad‌ began to become apparent last week. A number of Apple products, including Macs, iPhones, and iPads, are currently experiencing shortages due to the ongoing chip shortage.

Whether or not the new ‌iPad‌ makes an appearance during the company's "California streaming" event, Apple still has plenty in store to share. MacRumors will have in-depth coverage of Apple's event across our platforms, including a live blog on our website and live tweets via @MacRumorsLive on Twitter, so be sure to follow to keep track of everything Apple announced.

playtech1
I think it would make more sense for Apple to introduce the new iPads today alongside the iPhone and Watch, partly because the iPhone 13 is sort an 'S' model, so not really all that exciting, whereas the iPad Mini and Watch are reportedly bigger upgrades over existing models. It gets them into stores quicker to bump sales.

Then a Mac focused reveal in a few weeks time to focus purely on the M1X and the MacBook Pros and Mac Mini that will house it. I think an iPad update in that second event feels odd.
Score: 10 Votes (Like | Disagree)

JPack
The fact that the iPad suddenly became unavailable at all Apple Stores and delivery dates were pushed to mid-October for all configurations already gave it away. If it were chip shortages, it would affect the mini and the Air.

Pezimak
So we have a rumour claiming we will get a new cheaper iPad announced today, and another rumour claiming and the Mac Rumours round up indeed claiming no new iPad Mini will be announced today. That makes absolutely no sense at all.
Personally I think they will be announcing BOTH new iPads today or NO iPads today. They are not going to announce one at one event and another at another rumoured event.
Score: 9 Votes (Like | Disagree)

maybe for the budget lineup but it won’t be for 329. It will be higher since laminated displays cost more?

Interestingly the 16" MacBook Pro base models are also, 2 weeks delivery and unavailable at 90% of stores for pickup in Aus (13" intel in stock at all stores and 1 day delivery for all base models). Maybe we're gettitng everything in one hit? Wouldnt make much sense though to do that.

Maybe it has to do with chip shortage? We don’t have much time left.
Score: 6 Votes (Like | Disagree)
Read All Comments

Wednesday September 8, 2021 12:26 am PDT by Tim Hardwick
Apple's entry-level iPad stocks are running low at retail stores and online, indicating an update to Apple's most affordable iPad could be in the offing and may even arrive as soon as this month. Shipping times for the eighth-generation iPad have slipped into October with three to six week wait times, or are "currently unavailable" in the United States and other online markets, including...
Read Full Article • 52 comments

Tuesday September 14, 2021 12:54 pm PDT by Juli Clover
For those that missed Apple's California Streaming event this morning, the full hour and 20 minute long keynote can be watched both on YouTube and through Apple's Events website. Apple also debuted several new videos during the event, which have also been uploaded to YouTube separately. The videos feature the iPhone 13 Pro, iPhone 13, iPad mini, and Apple Watch Series 7, along with...
Read Full Article • 20 comments

Friday August 20, 2021 3:20 am PDT by Sami Fathi
Apple is planning to hold multiple product events in September, rather than its strategy from last year to break up its fall product launches into three separate events split across September, October, and November, according to sources who spoke to DigiTimes. In a new paywalled report today, the publication states that Apple will "host a series of product launch conferences in September,"...
Read Full Article • 68 comments

Monday September 13, 2021 1:53 am PDT by Tim Hardwick
After Tuesday's "California streaming" event where Apple will unveil the iPhone 13, Apple Watch Series 7, and AirPods 3, Apple has one further event planned that will focus on new Mac and iPad announcements, according to Bloomberg journalist Mark Gurman. Responding to a query about new Macs, Gurman tweeted that "there will be two events," and said he expected the latter to feature both new...
Read Full Article • 54 comments

Tuesday September 14, 2021 4:02 am PDT by Sami Fathi
Ahead of the "California streaming" Apple event later today, the online Apple Store has gone down in preparation for the launch of the iPhone 13, Apple Watch Series 7, and possibly the third-generation AirPods. Apple typically takes down its online store hours ahead of a product launch to prepare the storefront for the new devices. Like the past several events, today's Apple event will take ...
Read Full Article • 78 comments

Tuesday September 14, 2021 12:12 pm PDT by Juli Clover
At today's "California Streaming" event, Apple introduced refreshed versions of the iPad mini and the low-cost iPad, which was something of a surprise as we were expecting new tablet announcements later in the year. Both the iPad mini 6 and the iPad 9 are available for pre-order starting today, with orders up and live following the conclusion of the event. The iPad 9, which replaces the...
Read Full Article • 116 comments