The upcoming sixth-generation iPad mini will feature a surprising design change, according to recently shared images of a purported aluminum cutout of the device. 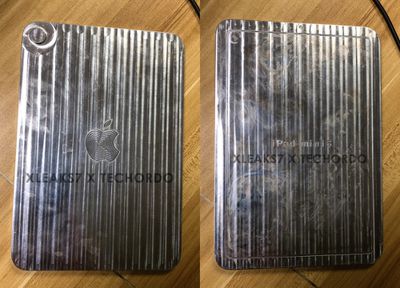 The images of the aluminum cutout originated from the website techordo.com in collaboration with a leaker named "xleaks7", whose track record for accurate leaks is not well established.

Although the aluminum cutout shows a broadly similar design to the iPad Air, featuring squared-off edges, slimmer bezels, a single rear camera, and a larger power button with Touch ID, there is one major change compared to all existing iPads: the location of the volume buttons.

This cutout shows that the sixth-generation ‌iPad mini‌ could have volume buttons located at the top edge of the device, which is the same side to feature the power button with ‌Touch ID‌. This is an unprecedented iPad design change, with all previous ‌iPad‌ models to date placing the volume buttons on the right side of the device.

Relocating the volume buttons to the top right of the device could make sense for larger iPads that are often used in landscape mode and with keyboards, since the user would no longer need to lift their hand up past the display to the top edge of the device to change the volume. In landscape, volume buttons in this new location would be much closer to an external keyboard.

The design change makes less sense for the smaller ‌iPad mini‌ than other ‌iPad‌ models, but Apple is likely to seek a consistent design across the lineup and the relocation of the volume buttons could expand to other iPads in the future.

Beyond the volume buttons, the cutout showcases a design that is broadly in line with renders of the upcoming ‌iPad mini‌, allegedly based on leaked images, shared by Apple leaker Jon Prosser earlier this year.

Solid cutouts with the exact dimensions of upcoming devices are often used by third-party accessory makers to develop accessories ahead of a new product's launch, so the peculiar volume button placement is likely to be accurately representative of the final device, providing supply chain sources are correct.

Reliable Bloomberg journalist Mark Gurman believes that the new iPad mini is on track to be released this fall alongside new iPhones, Apple Watches, AirPods, and MacBook Pros.