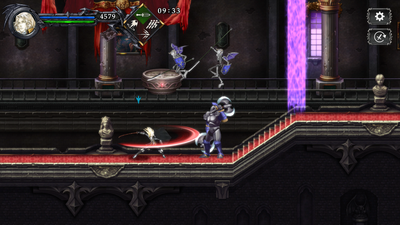 Another game can be added to the list, as Castlevania: Grimoire of Souls from well-known Japanese company Konami is set to launch exclusively on Apple Arcade, across the iPhone, iPad, Mac, and Apple TV. Mobile gaming enthusiasts may remember that the game had soft launched on the App Store in Canada back in 2019, but it was removed less than a year later. No specific release date has been announced for its Apple Arcade return.

The side-scrolling action game will feature a lineup of iconic characters from the popular gothic video game series, including Alucard, Simon Belmont, Charlotte, Shanoa, Maria, and more to come. Players will be tasked with blasting their way through Dracula's army using a variety of attacks, weapons, and unique character moves.

The original trailer for the game from 2019 can be watched below.


In addition, a trio of Apple Arcade games have recently been updated, with a new mini-game and new quests added to The Oregon Trail, five new songs added to Taiko no Tatsujin Pop Tap Beat, and 200 new levels added in Simon's Cat - Story Time.

Priced at $4.99 per month or $49.99 per year, Apple Arcade is a subscription-based service that provides access to a catalog of over 200 games without ads or in-app purchases across the iPhone, iPad, Mac, and Apple TV, with additional titles added periodically. A free one-month trial is available for first-time subscribers.

Mdracer
I have been hoping for games like this to be added. Long gone are the games where you just turn it on and start playing. I don't have time to watch 30 minutes of an intro to show me how to play and what the plot is.
Score: 13 Votes (Like | Disagree)

LawJolla
How do we type in Up up down down left right left right BA start?
Score: 12 Votes (Like | Disagree)

GizmoDVD
Wow this is awesome!
Score: 11 Votes (Like | Disagree)

Populus
Compared with Symphony of the Night, is this one a bit worse, just worse but fun anyways, or awfully worse? I mean, AFAIK, SOTN is the gold standard in Castlevania. But I don’t know anything about this game.

This are the games I am interested and I will pay Arcade for. With this Castlevania and the upcoming Fantasian Part 2, I think this is a good time to start an Apple Arcade subscription.

EDIT: Wait! Fantasian Part 2 was supposed to be released today!
EDIT 2: Ok ok, Fantasian has been updated with Part 2.
Score: 6 Votes (Like | Disagree)

TheYayAreaLiving ?
Woo Hoo! I love Konami games. They are fun to play with.
Score: 4 Votes (Like | Disagree)
Read All Comments