Apple today announced that with the launch of iOS 15 and iPadOS 15, it will begin scanning iCloud Photos in the U.S. to look for known Child Sexual Abuse Material (CSAM), with plans to report the findings to the National Center for Missing and Exploited Children (NCMEC). 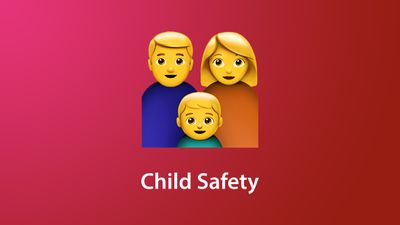 Prior to when Apple detailed its plans, news of the CSAM initiative leaked, and security researchers have already begun expressing concerns about how Apple's new image scanning protocol could be used in the future, as noted by Financial Times.

Apple is using a "NeuralHash" system to compare known CSAM images to photos on a user's iPhone before they're uploaded to iCloud. If there is a match, that photograph is uploaded with a cryptographic safety voucher, and at a certain threshold, a review is triggered to check if the person has CSAM on their devices.

At the current time, Apple is using its image scanning and matching technology to look for child abuse, but researchers worry that in the future, it could be adapted to scan for other kinds of imagery that are more concerning, like anti-government signs at protests.

In a series of tweets, Johns Hopkins cryptography researcher Matthew Green said that CSAM scanning is a "really bad idea" because in the future, it could expand to scanning end-to-end encrypted photos rather than just content that's uploaded to ‌iCloud‌. For children, Apple is implementing a separate scanning feature that looks for sexually explicit content directly in iMessages, which are end-to-end encrypted.

Green also raised concerns over the hashes that Apple plans to use because there could potentially be "collisions," where someone sends a harmless file that shares a hash with CSAM and could result in a false flag.

Apple for its part says that its scanning technology has an "extremely high level of accuracy" to make sure accounts are not incorrectly flagged, and reports are manually reviewed before a person's ‌iCloud‌ account is disabled and a report is sent to NCMEC.

Green believes that Apple's implementation will push other tech companies to adopt similar techniques. "This will break the dam," he wrote. "Governments will demand it from everyone." He compared the technology to "tools that repressive regimes have deployed."

Security researcher Alec Muffett, who formerly worked at Facebook, said that Apple's decision to implement this kind of image scanning was a "huge and regressive step for individual privacy." "Apple are walking back privacy to enable 1984," he said.

Ross Anderson, professor of security engineering at the University of Cambridge said called it an "absolutely appalling idea" that could lead to "distributed bulk surveillance" of devices.

As many have pointed out on Twitter, multiple tech companies already do image scanning for CSAM. Google, Twitter, Microsoft, Facebook, and others use image hashing methods to look for and report known images of child abuse.

And if you’re wondering whether Google scans images for child abuse imagery, I answered that in the story I wrote eight years ago: it’s been doing that **SINCE 2008**. Maybe all sit down and put your hats back on. pic.twitter.com/ruJ4Z8SceY — Charles Arthur (@charlesarthur) August 5, 2021

It's also worth noting that Apple was already scanning some content for child abuse images prior to the rollout of the new CSAM initiative. In 2020, Apple chief privacy officer Jane Horvath said that Apple used screening technology to look for illegal images and then disables accounts if evidence of CSAM is detected.

Apple in 2019 updated its privacy policies to note that it would scan uploaded content for "potentially illegal content, including child sexual exploitation material," so today's announcements are not entirely new.

macrumorsuser10
Apple should add scanning for:

1. Photos of the confederate flag.
2. Photos of people not wearing Covid masks.
3. Photos of Chinese people disrespecting the Chinese government.
4. Photos of Middle eastern women not wearing burkas.
5. Photos of a group of people with too many whites, not enough blacks.
Score: 74 Votes (Like | Disagree)

You should let law enforcement install cameras in your home then, so they can make sure you are not doing anything illegal while you take a shower, for example. After all, you have nothing to hide, do you?
Score: 57 Votes (Like | Disagree)

This simply isn’t true. As the article notes, the technology can easily be changed to other things in the future - what if they scanned for BLM supporter images or anti-government images? What if they wanted to scan and track certain political parties?

It’s not about child sex material, everyone agrees that that is wrong, it’s about passing over more and more of our rights to Big Tech. Give them an inch and they’ll take a foot.
Score: 51 Votes (Like | Disagree)

Depends on the definition of „wrong“. Sometimes it is up to self serving definitions of dictators
Score: 50 Votes (Like | Disagree)

jarman92
"Other companies already participate in this outrageous invasion of privacy" is not nearly the defense of Apple these people seem to think it is.
Score: 48 Votes (Like | Disagree)
Read All Comments

Thursday January 27, 2022 2:50 pm PST by Juli Clover
Apple is developing a new trade-in tool that will be used to scan the iPhone for cosmetic damage, likely with the aim of generating a more accurate trade-in estimate. Code for the feature was discovered in the iOS 15.4 beta by MacRumors contributor Steve Moser, and it was also highlighted by 9to5Mac. There's not a lot of detail right now, but in a Diagnostic Services section, there are...
Read Full Article • 24 comments