Ahead of when the company is expected to reveal an updated iPad mini featuring an iPad Air-inspired redesign, Apple is out asking some existing ‌iPad mini‌ customers about whether the ‌iPad mini‌'s screen size is too big, too small, or whether it's "just right." 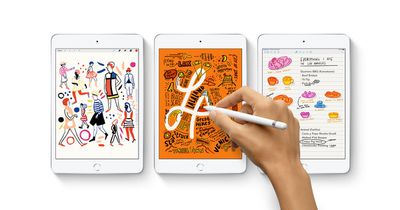 Apple often sends out surveys to customers. While they aren't always entirely indicative of the company's plans, it offers a glimpse into what Apple's teams are trying to gauge regarding customer's wants and needs. The latest survey, initially reported by ITHome, is an apparent attempt by the Cupertino tech-giant to understand the ‌iPad mini‌'s customers' base and demographic ahead of a significant redesign.

The first question Apple pitches in the survey is, "What do you think of the size of the ‌iPad mini‌ 4's display? Is it too small, just right, or too big?" The options include the display is "too small," "a little bit too small," "just the right size," "a bit too large," and "too large."

One of the most credible reports for the upcoming 6th-generation ‌iPad mini‌ indicate that it could feature a screen size upwards of 8.5 to 9-inches. Anywhere around that ballpark would place the new ‌iPad‌ on the lower end of the ‌iPad‌ spectrum, as the current smallest ‌iPad‌ after the ‌iPad mini‌ 5 is the baseline ‌iPad‌ with a 10.2-inch display.

Bloomberg's reliable Mark Gurman has previously stated that the upcoming ‌iPad mini‌ will feature a redesign inspired by the iPad Air. Like the iPad Pro, the ‌iPad Air‌ features no Home Button, making it easier to use the ‌iPad‌ in whichever orientation users prefer due to the gesture-based navigation system, rather than having to find the Home Button physically.

The two remaining questions Apple asks are more generic, asking customers to state alongside their ‌iPad mini‌, what other devices they own such as laptops, other tablets, smartphones, smartwatches, and so on. Finally, Apple asks customers to single out what accessories they use with their current ‌iPad mini‌. Apple lists the following accessories for customers to choose from:

Eventually, it's safe to assume that as part of the company's environmental pledge, iPads may subsequently no longer include USB power adapters in the box. Apple has yet to make that move, however.

The baseline ‌iPad‌ and ‌iPad mini‌ are the only two remaining iPads in Apple's lineup to feature a 3.5mm headphone jack, which was famously removed from the iPhone with the ‌iPhone‌ 7. The survey asking customers about their use of external speakers and headphones/earphones could be interpreted that the 6th-generation ‌iPad mini‌ will remove with the headphone jack. Regardless of the survey, though, reports of an ‌iPad‌ Air-inspired redesign coincides with the expected removal of the jack.

Finally, Apple's surveys could add credibility to a report that the upcoming ‌iPad mini‌ will feature a Smart Connector, which would open up an entirely new class of ‌iPad mini‌ accessories capable of using the connector, such as keyboards and more.

The new ‌iPad mini‌ is expected to launch later this fall, alongside a slew of new product releases including new iPhones, Apple Watches, AirPods, and MacBook Pros.

H3LL5P4WN
Honestly after having owned a couple Minis over the years, I feel like the physical size overall is just right. Not narrow like an android table, not a perfect square.

Now, if they want to fill that same physical size with larger screen that's still of a high DPI... that would be quite nice.
Score: 13 Votes (Like | Disagree)

hagar
This survey can’t be for the upcoming iPad mini. It’s not like they can change the size on the fly. The next gen is already set in stone if it’s due this fall.
Score: 7 Votes (Like | Disagree)

whatgift
I did that survey last week for an 8th Gen iPad, it’s not specific to the iPad mini.
Score: 6 Votes (Like | Disagree)

Eventually, it's safe to assume that as part of the company's [S]environmental[/S] $$$ pledge, iPads may subsequently no longer include USB power adapters in the box.

ian87w
So, no charger included on the next mini? I mean why intentionally worded chargers not included in the box? :D Apple would be like "see people are using other chargers anyway, so why put a charger in the box?"
Score: 5 Votes (Like | Disagree)

alien3dx
not getting any survey

1. usb c the most important to me .
2. official keyboard attachment .
Score: 4 Votes (Like | Disagree)
Read All Comments

Thursday September 23, 2021 6:03 am PDT by Joe Rossignol
Apple's sixth-generation iPad mini is set to launch this Friday, and ahead of time, the device has started shipping to customers around the world. Track your iPad mini pre-order shipping status with others in the MacRumors forums. The new iPad mini is essentially an iPad Air mini, as the two devices now share several features, including slimmer bezels, a USB-C port, a Touch ID power button,...
Read Full Article • 91 comments

Wednesday September 22, 2021 4:27 am PDT by Tim Hardwick
Apple opened pre-orders for the iPad mini 6 right after last week's "California streaming" event, with first orders arriving this Friday, but anyone who is waiting for the reviews to come in before they order one will likely have a wait on their hands, as estimated delivery times for many variants have since slipped into November in the U.S. and select other countries. For example, for a...
Read Full Article • 41 comments

Thursday September 16, 2021 8:48 am PDT by Joe Rossignol
Both the iPhone 13 and the new iPad mini are equipped with Apple's latest A15 Bionic chip, but benchmark results reveal that the chip is downclocked to 2.9GHz in the iPad mini, compared to 3.2GHz in all iPhone 13 models. As to be expected, the downclocked chip appears to have a small 2-8% impact on the iPad mini's performance compared to iPhone 13 models. In early Geekbench 5 results, the...
Read Full Article • 434 comments