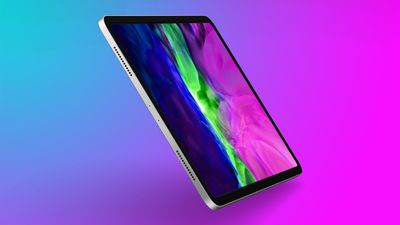 Citing a Chinese supplier, the site says that the fifth-generation ‌iPad Air‌ will continue to feature a 10.9-inch display and a Touch ID button on the side, but it will gain a dual-lens camera system with Wide and Ultra Wide cameras.

A LiDAR Scanner is also a possibility for the ‌iPad Air‌, though it is not guaranteed and the supplier did not know for sure. Additional features include a four speaker audio system and a 5G mmWave chip.

Mac Otakara expects the fifth-generation ‌iPad Air‌ to feature an A15 chip, and while today's rumor includes no detail on a release date, prior information has suggested an early 2022 launch.

There's also no mention of an OLED display, and multiple other rumors have suggested that Apple is working on an iPad Air-sized ‌iPad‌ with an OLED display. The ‌iPad Air‌ is expected to use OLED technology while the ‌iPad Pro‌ line will stick with mini-LED technology.

‌Mac Otakara‌ also says that its "latest information" indicates the upcoming ninth-generation low-cost ‌iPad‌ and the iPad mini 6 "do not seem to be any different" from the existing eighth-generation ‌iPad‌ and ‌iPad mini‌ 5.

The site suggests that it's possible that the only update will be an update to the A14 chip, with a design change not coming until 2022 or later.

That is not in line with previous rumors, especially about the ‌iPad mini‌ 6. We've heard reports from reliable sources like Apple analyst Ming-Chi Kuo and Bloomberg's Mark Gurman that have suggested the next ‌iPad mini‌ will have a larger display and possibly no Home button.

The ‌iPad mini‌ 6 is expected to come out this fall, so we don't have too much longer to wait to find out which rumor set is true. We're either getting a small refresh that does not tweak the design, or a larger refresh that brings the ‌iPad mini‌ in line with the ‌iPad Pro‌ and ‌iPad Air‌.

As for the low-cost ‌iPad‌, ‌Mac Otakara‌ earlier this year said that it would look similar to the iPad Air 3, but it's no longer clear if that's accurate.

collin_
iPad Mini needs the modern iPad design. :< It was never marketed as a low-end device.
Score: 19 Votes (Like | Disagree)

jclardy
Am I missing something? We already have an iPad Air that is the "same design" as the iPad Pro...
Score: 15 Votes (Like | Disagree)

dantracht
They can't possibly NOT change the design of the mini at this point. Don't get me wrong, LOVE LOVE LOVE my mini 5, but.....
Score: 15 Votes (Like | Disagree)

Homme
Mac Okatara STOP LYING. you idiots not only have a piss poor track record like digitimes but come on… prosser, Gurman, 9to5 Mac, Ming Chi Kuo and even Ross young ( who have much better track record than them) said that there will be a redesigned iPad Mini…. I still can’t believe this is the second time that they still think mini 6 will look the exact same as mini 5.

heck even digitimes is saying the same thing as above that there is a redesigned iPad Mini (besides the part when they said that there will be Mini LED instead of LCD)
Score: 12 Votes (Like | Disagree)

Radeon85
Apple better change the iPad Mini design because if they don't by next year its going to be 10yrs with no design change whatsoever and that's just pathetic.

The Mini is in desperate need of a refresh and it would be nice if all of the tablets had the same design.
Score: 10 Votes (Like | Disagree)
Read All Comments