Apple plans to release new iPad and MacBook models with OLED displays in 2022, according to industry sources cited by Taiwanese supply chain publication DigiTimes. The information was shared in the site's paywalled "Before Going to Press" section, so there are no further details yet, but the full report should be released by tomorrow. 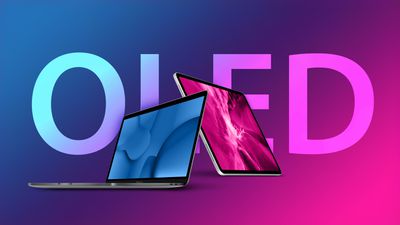 Apple has gradually increased its adoption of OLED displays, starting with the Apple Watch in 2015. Two years later, the iPhone X became the first iPhone with an OLED display, and Apple has since expanded the display technology across the entire iPhone 12 lineup. OLED displays have several benefits over LCDs, including higher brightness, improved contrast with deeper blacks, wider viewing angles, and more.

In November, Korean website The Elec reported that Apple planned to release new iPad Pro models featuring OLED displays in the second half of 2021, and claimed that Samsung and LG were already in the process of developing the displays. However, this rumor was soon followed up by a research note from Barclays analysts that said an iPad with an OLED display does not appear to be in the works for this year.

In a research note shared with MacRumors in December, the Barclays analysts said an iPad with an OLED display is unlikely to launch until 2022 at the earliest, based on their conversations with Apple supplier sources in Asia.

Given that Mini-LED backlit displays offer many of the same advantages as OLED, such as high brightness and high contrast, one possibility is that Apple will eventually use a mix of both display technologies across its iPad and Mac lineups based on price points. Apple's exact plans remain to be seen, but there is mounting evidence that OLED displays will be involved in some capacity within the next year or two.

BigMcGuire
An OLED iPad - reading at night is going to be a blast with true blacks :D. This will be great! I really like reading on my iPhone at night with OLED.
Score: 13 Votes (Like | Disagree)

2022 may be a bit optimistic, but it’s not just not doubtful - it’s inevitable. LCDs will fall by the side like CRTs wil OLED in their place, miniLED is only a stop-gap.

If it's only a stop-gap why bother investing the time and money into Macs with mini-LED screens? Better just to wait and transition to OLED next year. Makes no sense.
Score: 10 Votes (Like | Disagree)

Keniutek
The way to go is MicroLED.
Score: 9 Votes (Like | Disagree)

The 2021 LG OLED TVs have solved the blue-diode-lifespan problem along with the blue brightness issue as well. I bet we will see a 3x graphics mode like on iOS to make up for pentile layout, especially because the M1 is powerful enough to drive the extra pixels no problem.

LG uses an RGBW layout with color filters on top of 3 of the 4 white OLEDs, the last sub pixel would have no filter. (which themselves consists of RGB layers resulting in white). it's not like a standard OLED essentially and power draw in turn is much higher, I highly doubt you'd see that implementation in a laptop or phone at least anytime soon. It's more resistant to burn in and a way around the blue OLED issue which still actually hasn't been solved. For heavy uses with static elements in their workflows it could still be an issue if they intend to keep the laptop for a while.

Mac Fly (film)
Maybe it's just me but coming from SE1 to 12 mini I noticed the screen is worse on the eyes when scrolling text. Especially in dim or dark room. Probably a consequence of greatly increased contrast or a side-effect of OLED in general regarding moving text on screen, but it's a pity. I'm not in love with it. Black levels are cool, but still.
Score: 7 Votes (Like | Disagree)
Read All Comments

Apple's First OLED iPad Coming in 2023, According to Display Experts

Wednesday July 7, 2021 11:16 am PDT by Juli Clover
Apple is expected to release its first OLED iPad in 2023, Display Supply Chain Consultants (DSCC) said today in its newest quarterly OLED Shipment Report. Apple will enter the market with a 10.9-inch AMOLED iPad, which prior sources have suggested could be an iPad Air. There have been multiple reports about Apple's work on an OLED iPad, and the sheer number of rumors all but confirm that the ...
Read Full Article • 124 comments