Apple is believed to be working on a completely new, Pro-style version of the iPad mini, according to recent reports. 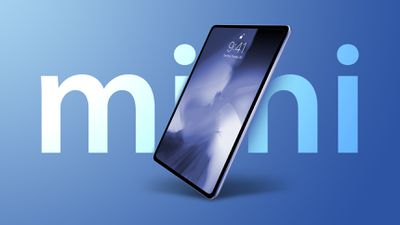 According to Bloomberg's Mark Gurman and Debby Wu, Apple is planning to launch a new ‌iPad mini‌ model with narrower screen bezels, with the company also testing a design that does away with the Home button.

However, it seems that this is more than a Pro-style redesign of the ‌iPad mini‌, being an entirely new kind of device. Separately, an ‌iPad mini‌ with a similar design to the current fifth-generation model, retaining the Lightning port and a Touch ID Home Button, has also been rumored to launch this year. While it is not yet clear exactly where either of these devices will be placed in the iPad lineup or indeed even if both will end up being released, it seems that there are two different kinds of ‌iPad mini‌ in development.

The "Pro" ‌iPad mini‌ would be distinguished by its design and features like USB-C. Leaker Jon Prosser has claimed to have seen schematics, CAD files, and real images of the next-generation ‌iPad mini‌ and created renders to reflect the purported new design, showing the squared-off edges and reduced bezels that debuted on the iPad Pro but have since spread to the iPhone 12, iPad Air, and iMac.

Prosser says that the new ‌iPad mini‌ will feature slimmer bezels around the display and no home button, with ‌Touch ID‌ being relocated to the power button like the ‌iPad Air‌. He did not elaborate on the size of the new ‌iPad mini‌'s display, but claimed that it will have dimensions of 206.3mm x 137.8mm x 6.1mm.

In terms of features, Prosser said that the ‌iPad mini‌ will switch from a Lightning connector to USB-C, have "dramatically improved" speakers, the A14 chip, support for 5G connectivity, and compatibility with a new, smaller Apple Pencil, bringing the smaller ‌iPad‌ closer than ever to the high-end ‌iPad Pro‌. Indeed, such is the apparent positioning of this device in the ‌iPad‌ lineup that it is being referred to as the "‌iPad mini‌ Pro" in some reports.

Kuo now expects a new ‌iPad mini‌ model to launch in the second half of 2021. Prosser and a range of other reports have similarly claimed that the new ‌iPad mini‌ will arrive by the end of this year, being available in three colors: black, silver, and gold.