Apple is aiming to debut its first augmented reality (AR) headset in the second quarter of 2022, according to a new research note from analyst Ming-Chi Kuo seen by MacRumors. 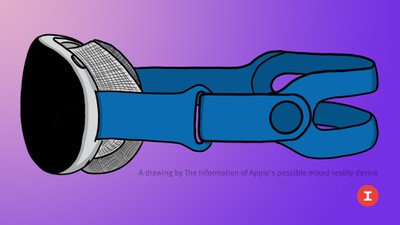 Headset mockup based on a source with direct knowledge of the device (The Information)
The research report focuses on prospects for key Apple supplier Genius Electronic Optical, and notes that the company will benefit from a number of upcoming VR and AR products from the likes of Facebook, Sony, and Apple.

We predict that Apple will launch AR HMD [head-mounted display] devices in 2Q22. The device will provide a video see-through AR experience, so the lens is also needed, and Genius is also a key supplier.

Apple has been rumored to be working on a pair of AR-related headsets, led by an initial "mixed-reality" device that has variously been rumored to be launching in 2021 or 2022. A sleeker pair of augmented reality glasses is rumored to follow, perhaps around 2025.

As recently as January, Kuo was predicting that Apple's initial AR headset would debut sometime in 2021, but by March he had pushed his prediction back to "mid-2022," more in line with today's report.

Bloomberg's Mark Gurman also indicated back in March that an announcement about the headset could come in the "next several months," but there has been no sign of such an announcement, and today's WWDC keynote would have been a prime opportunity.

Some of the uncertainty about timing may be related to a potentially lengthy gap between announcement and launch for the AR headset. As a new platform for Apple, the company may want to announce it a number of months ahead of any product launch to give developers time to prepare. Reports have, however, indicated that Apple's first AR headset will be a pricey, high-end device largely targeted at developers rather than the broader public.

Kuo's report today on Genius Electronic Optical also touches on iPhone 13 production, noting that it appears Genius will be the exclusive supplier of wide-angle and telephoto camera lenses for the upcoming ‌iPhone 13‌ lineup, at least through the end of this month. Apple's other supplier for these components, Largan, is said to have failed to meet Apple's requirements and has been asked to temporarily halt component shipments.

Genius is currently picking up the slack following Largan's misstep, and Kuo believes Genius will ultimately be responsible for 65–70% of shipments for these lens components, up from market consensus of a 40–50% share.

snow755
after what happen with today event i would not listed too any more leaks about up comeing stuff
Score: 11 Votes (Like | Disagree)

UltimateSyn
How about those MacBook Pros?
Score: 11 Votes (Like | Disagree)

The one that was launched yesterday? I am getting 14” maxed out and happy with the mini LED screen, it looks awesome!
Score: 8 Votes (Like | Disagree)

Kuo is a bot:) Too much of his spam lately…especially about the new hardware that was launched yesterday

i thought Jon Prosser told that MBP are a given for WWDC...KUO also ? are you sure?
Score: 5 Votes (Like | Disagree)

Theyayarealivin
Mr. Kuo: What about the Macbook Pro. We need research notes for 2021. Everyone in Macrumors and on YouTube is just guessing...