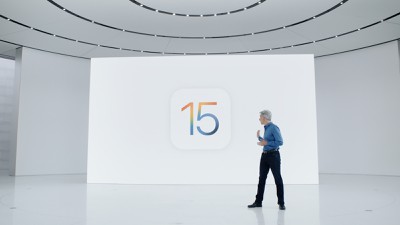 In iOS 15, FaceTime features a new grid view and portrait mode support for video. For audio, FaceTime calls now offer Spatial Audio so that voices sound as if they are coming from where the person is located on screen, and adaptive voice isolation for a more natural experience.

In addition, users can now generate a shareable link to a scheduled video call, and can join ‌FaceTime‌ calls through the browser on Android and Windows devices.

"SharePlay" in ‌FaceTime‌ allows users to bring music, videos, and movies into calls in sync, as well as share screens. SharePlay works across ‌iPhone‌, iPad, and Mac, and with shared playback controls, anyone in a call can play, pause, or jump ahead. SharePlay is also available as an API to be integrated into third-party apps such as Disney+, HBO Max, and TikTok.

Notifications in ‌iOS 15‌ have been redesigned, adding contact photos for people and larger app icons. There is now a notification summary that presents notifications based on how users interact with their apps and priority.

‌iOS 15‌ offers new user statuses called a "Focus." A Focus filters notifications and apps based on what a user wishes to focus on. Users can create a custom Focus or select a suggested Focus. Users can also create Home Screen pages with apps and widgets that apply to moments of focus to display relevant apps only.

When a user's Focus or Do Not Disturb status blocks incoming notifications, their status is displayed to others in Messages.

In ‌iOS 15‌, ‌Photos‌ will also be presented in Spotlight searches and Apple Music songs can be added to ‌Photos‌ memories. Memory mixes are synchronized with the video and images, and user-configurable with intelligently chosen songs from ‌Apple Music‌.

Wallet will also supports identity cards in the United States. Users simply scan their ID to add it to the Wallet app.

The Weather app now features a completely new design, a full-screen in-app map, and new background animations that reflect the sun's position. The new design changes based on conditions and notifications can highlight when rain or snow starts and stops.

Maps features a globe view and a much more detailed 3D view in cities, including a new night-time mode. There are new road details, such as turn lanes, medians, bike lanes, and pedestrian crosswalks, to assist drivers in cities.

There is now more information in the Transit view, and Maps now automatically follows you during a transit route and can alert you when to disembark, as well as offer more detailed directional information.

With ‌iOS 15‌, users can hold up their ‌iPhone‌, and Maps will generate an accurate position to show detailed walking directions in augmented reality.

Safari features a completely new design with easier-to-reach controls. There is a new, compact tab bar that floats at the bottom of the screen so users can swipe between tabs. There are also tab groups to allow users to easily access them at any time across any device. Safari on the ‌iPhone‌ also supports extensions for the first time and a customizable start page.

The Health app has a new sharing tab that lets users share their health data with family or caregivers, and Trends can highlight meaningful changes in health metrics. Find My adds a new widget, support for live-streamed locations, and AirPods on the ‌Find My‌ network.

‌iOS 15‌ will be available on all of the same devices as iOS 14, meaning that all iPhones from ‌iPhone‌ 6S and newer are supported.

countryside
Why is it still impossible to mark threads as unread so we don't forget to reply?!
Score: 16 Votes (Like | Disagree)

cnharris
"uses intelligence to suggest" == annoying after 5 minutes and will be turned off.
Score: 13 Votes (Like | Disagree)

_Spinn_
They are definitely trying to position FaceTime as a competitor to Zoom with these new features.
Score: 8 Votes (Like | Disagree)

Monday June 7, 2021 10:22 am PDT by Sami Fathi
Apple today, with iOS 15, announced a slew of new changes coming to notifications on iPhone, including a completely redesigned interface and a new way to summarize notifications based on activities. Notifications now have a completely new design on the lock screen, featuring richer images for messages, and a cleaner more compact look. With the redesign, iOS 15 also introduces a Notification ...
Read Full Article • 22 comments

Monday June 7, 2021 10:37 am PDT by Mitchel Broussard
Apple today announced that some users will be able to add their driver's license or state IDs to the Wallet app in iOS 15 this fall. This will be available in select states in the United States. If supported, you'll be able to scan your ID and store it directly in the Wallet app. Apple is working with the TSA to enable airport security checkpoints as the first place customers can user their...
Read Full Article • 123 comments