Apple's iMessage to Finally Get Major Update at WWDC?

Apple has put iMessage at the center of its promotional materials for WWDC next week, hinting that the company's popular messaging service could be seeing substantial upgrades. 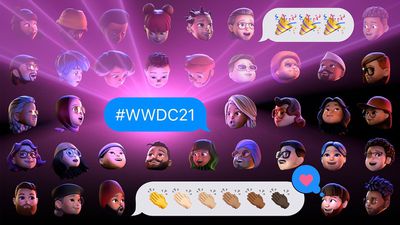 iMessage appears to be a central theme in the marketing for this year's WWDC. For example, the placeholder for WWDC's live stream on YouTube, which is already live, features iMessage bubbles, Tapback, and iMessage's full-screen laser effect. Similarly, the Twitter hashflag to promote WWDC this year is an iMessage thumbs-up Tapback bubble.

The iMessage stickers and official WWDC attire and pins for this year also features iMessage bubbles, Tapback reactions, and emojis, but this is not necessarily uncommon for Apple's yearly conference-related outerwear.

Reliable Bloomberg journalist Mark Gurman had previously reported that iOS 15 will feature improvements to iMessage, which appears to mirror the theme from Apple's promotional materials. Specifically, Gurman explained that there will be new options for automatic replies, statuses, and notifications:

There will also be an option to set automatic replies to messages depending on their status. That will be an improvement over the current auto-reply feature, which is only currently available while driving. Apple has added some unique notifications features such as Do Not Disturb and Sleep Mode, but this will mark the first time the company offers a systemwide feature for changing notifications depending on a user’s status.

The company is also working on upgrades to iMessage with the eventual goal of acting as more of a social network and better competing with Facebook Inc.'s WhatsApp. Those changes are still early in development and could come later, the people said.

The changes are reportedly in line with a broader strategy to make iMessage more of a social network that can better compete with WhatsApp.

Last year, MacRumors found evidence that Apple was internally testing the ability to retract sent messages, typing indicators in group chats, the ability to mark the last message of a conversation as unread after opening it, and an expansion of the "/me" command for sharing status updates, a feature that has been available on the Mac since the iChat days. Apple has also patented a number of as-yet unreleased iMessage features, such as the ability to edit sent messages.

The extent of the upgrades to iMessage at this year's WWDC are not yet clear, but given the wealth of evidence that iMessage has a significant role to play in this year's WWDC and a flurry of rumors around new messaging features, some kind of update seems to be highly likely.

zorinlynx
iMessage will never truly take off as a "social network" until it's cross platform. Half of my friends use Android phones; we all use Telegram to chat because it's available on all our devices.
Score: 55 Votes (Like | Disagree)

Techwatcher
Not sure why "finally" is the word being used. Not sure how many people have been on the edge of their seats waiting for an iMessage revamp.

There's many more pressing issues that need updates (like iPadOS) that people are concerned about compared to iMessage.
Score: 41 Votes (Like | Disagree)

cmaier
I would hope they’d also put a lot of effort into making Facetime more of a zoom competitor.
Score: 27 Votes (Like | Disagree)

SuperCachetes
Yeah, I don't need iMessage to do "new" things. I need it to do basic things better... Like reliably sending mixed iMessage/SMS/MMS messages to groups. :confused:
Score: 26 Votes (Like | Disagree)

DinkThifferent
Would love to see like an Apple Exclusive Photo Sharing with Friends feature.

No Companies, No Likes, No Ads, No Filters. Just sharing photos on a chronological photo wall.