The U.S. Patent and Trademark Office this week published a new Apple patent application that details features for editing sent messages, an improved application launcher and many other possible features. (via AppleInsider) 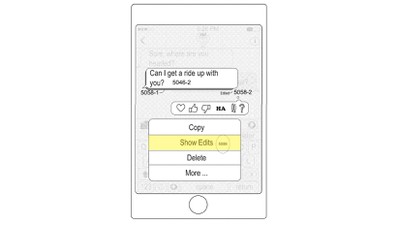 The patent application specifically describes features of "a messaging user interface of a message application" that are not currently in iOS. These include ways to easily acknowledge messages, display private messages, synchronize viewing of content between users, translate foreign language text, and combine messages into a group. The document suggests improvements to some familiar Messages features such as bubble and full-screen effects, as well as sending and receiving money with Apple Pay.

Among the most striking new features presented is full text-editing capability for sent messages. A simple means of selecting a message with a predefined touch input could lead to a menu with an option for editing, resulting in "a message editing interface" and display of "a revised version of the message" for all recipients. The included drawing shows a "Show Edits" button that could show a history of changes.

iMessage apps were introduced in iOS 10 with some limitations, and many messages apps are reliant on existing third-party apps on a user's device. The patent, however, details fuller apps within Messages and new "Application Management Interfaces". The enclosed illustrations appear to show a dynamic application dock that would work alongside "input affordances" to guide the user to find the correct app. There is also the suggestion that applications in Messages could be more well-integrated and interactive.

Improving applications in Messages and text-editing features would allow Apple to better compete with other more fully-featured popular messaging apps such as WeChat. When these features will be included in iOS remains to be seen.

quietstormSD
They should patent something that if the iPhone detects alcohol on your breath, the message will be undeliverable until the next morning. Then you won't need the edit feature at all.
Score: 33 Votes (Like | Disagree)

TiggrToo
How is this a valid patent? Surely editing instant messages has been around for eons... Does this not get affected by "prior Art"?
Score: 25 Votes (Like | Disagree)

How is this a valid patent? Surely editing instant messages has been around for eons... Does this not get affected by "prior Art"?

The patent isn't about editing messages, it's about the user interface/look and feel/gestures used to edit messages. It's clear if you actually read the claims in the patent.
Score: 23 Votes (Like | Disagree)

Sanme
How about patenting replying to a specific message

Annoying af iMessage doesn’t have this in 2020
Score: 20 Votes (Like | Disagree)

Apple thinks this is some killer feature lol.

Tell you what would be a killer feature, the ability to do a search in iMessage that's actually useful. It's one of the reasons I use WhatsApp.
Score: 11 Votes (Like | Disagree)
Read All Comments