AliveCor, a company that that has developed an ECG 'KardiaBand' for the Apple Watch, today filed an antitrust lawsuit against Apple that accuses the Cupertino company of "monopolistic conduct." 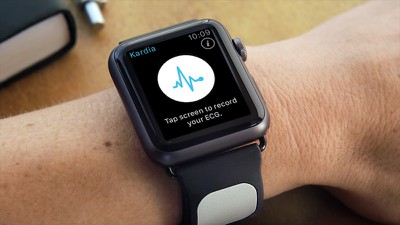 The KardiaBand received FDA approval in 2017, and in 2018, Apple debuted the Apple Watch Series 4 with built-in ECG capabilities and its own irregular heart rhythm notifications followed. AliveCor claims that Apple saw the success of the KardiaBand and changed the functionality of watchOS to sabotage KardiaBand and "corner the market for heart rate analysis on Apple Watch."

AliveCor claims that the SmartRhythm app was initially allowed in the App Store, but Apple later claimed that it violated ‌App Store‌ guidelines. AliveCor says that it was forced to adapt SmartRhythm multiple times to adjust to Apple's rules, and then Apple "made changes to watchOS's heart rate algorithm" to ensure that SmartRhythm and other competing apps would not work. Apple allegedly changed the heart rate algorithm in watchOS 5 to prevent third-party apps from being able to identify irregular heart rate situations.

The algorithm was virtually the same on the first four versions of watchOS, but, with the introduction of the Series 4 Apple Watch and Apple's introduction of its competing heartrate analysis app, Apple released watchOS5, which, among other things, "updated" the Watch's heartrate algorithm. That update did not improve the user experience for Apple Watch purchasers; instead, its purpose and effect was simply to prevent third parties from identifying irregular heartrate situations and, thus, from offering competing heartrate analysis apps.

Prior to Apple's alleged sabotage, AliveCor says that its SmartRhythm app was "simply better at identifying worrisome heart-related health events," and could have successfully competed with the ECG function built into the Apple watch. AliveCor was forced to pull SmartRhythm from the ‌App Store‌ because the irregular rhythm functionality no longer worked.

All of this has been devastating to competition, as Apple today commands 100% share of heartrate analysis apps on watchOS devices and, if viewed in the alternative as part of either the U.S. ECG-capable smartwatch or U.S. ECG-capable wearable devices market, over 70% market share. With a single update, Apple thus eliminated competition that consumers clearly wanted and needed, depriving them of choice for heartrate analysis that is better than what Apple can provide.

AliveCor has previously filed several patent infringement lawsuits against Apple, alleging that Apple copied AliveCor's cardiological detection and analysis technology. Those lawsuits have not yet been resolved, and with today's antitrust suit, AliveCor is seeking damages and an injunction that would require Apple to "cease its abusive conduct."

This is just one of several antitrust battles that Apple is facing. A high-profile lawsuit brought by Epic Games wrapped up earlier this week, and there are also antitrust investigations into Apple's ‌App Store‌ fees in the UK and in the United States, among other countries.

Send your complaint to the FDA.

They did get FDA approval per the article but their complaint is that they are dependent upon Apple devices to trigger their own device's operation and Apple has changes its API so they can no longer trigger that process. If I were making a medical device that was dependent on Siemens imaging equipment to trigger my operation I wouldn't be at all surprised if Siemens unilaterally changed their interfaces either. That would have been a risk I took on by making my device dependent upon another manufacturer without contractual agreements in place to support said interface. They're taking a shot in the courts but it won't work out in their favor.

calikid78
It's nuts. You build your own platform, O/S and now you get sued because you won't give everyone access to your proprietary, hard work. Sounds like all these idiots should go invent their own tech and O/S and stop complaining about Apple's.
Score: 39 Votes (Like | Disagree)

nattK
Is suing Apple a trendy thing right now? It feels like everyone and their grandmother are out suing Apple nowadays.
Score: 37 Votes (Like | Disagree)

Mebsat
So Apple is using its monopoly power to dominate the Apple Watch ECG market?
Score: 37 Votes (Like | Disagree)

WiseAJ
Yeah Apple clearly copied them, because it's not like they were working for years on the ecg function for the Apple Watch and got it designed and FDA approved in under a year. :rolleyes:.

swingerofbirch
What's sad is that AliveCor actually is better, too.

They've been doing this for a long time. Their a-fib detection is superior because it actually analyzes rates that are typical for a-fib, whereas Apple caps their detection to low pulse rates. AliveCor's algorithms have gotten really good and are approved for more diagnoses by the FDA than Apple's.

Tim Cook talks about reading letters of people's lives he's saved, and then they cut out a competitor that actually has a better and less expensive product. How many lives has that impacted?
Score: 22 Votes (Like | Disagree)
Read All Comments