Apple is planning to boost its advertising business through a new ad slot on the App Store search page which will allow developers to promote their apps across the entire platform, rather than just when users search for a specific app, according to a new report from the Financial Times. 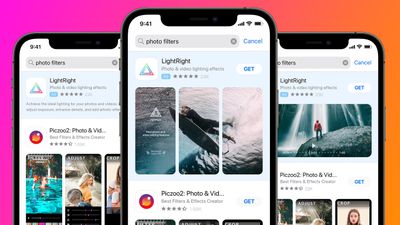 Apple already boasts an ‌App Store‌ advertising business where it allows developers to pay for the top result spot when users search for a specific app on the platform. Apple says these ads are "an efficient and easy way to help people discover your app at the top of ‌App Store‌ search results," and now the company wants to expand on it.

According to the Financial Times, citing people familiar with the matter, the company plans to roll out a second ad slot within the ‌App Store‌, but this time directly within the Search page, by the end of the month. The new ads will appear alongside the current "Suggested" section on the page and will be visible to users across the whole platform.

The report lacks specific details on the mechanism behind the new ad slot. For example, Apple's current search ads include careful features that ensure smaller developers can bid and pay for ads and not get dominated by large developers and corporations. The new ad slot comes as the advertising industry is bracing for impact from the fallout of the upcoming iOS and iPadOS 14.5 update.

Beginning with the new update rolling out to users next week, apps will be required to ask for users' permission to access their IDFA or identifier for advertisers. By accessing the IDFA, developers can track a user's activity across other apps and websites, even those owned by different companies, to provide personalized ads to users.

The new requirement, called App Tracking Transparency, has received heavy criticism from companies such as Facebook, who are concerned that the new requirement will result in a majority of users opting out of ad tracking. A large portion of Facebook's business comes from selling ads across its platform, and ATT could cut into its revenue by making it harder to provide personalized, relevant ads to users.

Jony Ive and Co.
Apple should never even have ads in the app store in the first place.
I buy iOS because of the clean, ad-free experience. Otherwise, iOS would just be like Samsung's OS, littered with intrusive ads and a pain to use.
Score: 33 Votes (Like | Disagree)

User 6502
I do not like this at all. I hope they will let the user disable it, but I bet they won’t. Considering the App Store is the only way of getting new apps I find this a highly immoral and manipulative way of shoving ads through our throats.
Score: 20 Votes (Like | Disagree)

Dandoodle
Rubbish. If we’re paying for Apple one, the whole apple ecosystem should be ad free. Personally I think ads are the next scourge Apple should be looking at after privacy!
Score: 17 Votes (Like | Disagree)