Tech blog 91Mobiles has obtained 3D renders of what it claims will be the iPhone 13 Pro, revealing a largely familiar design with a few notable changes, including a smaller notch and a significantly larger rear camera system. 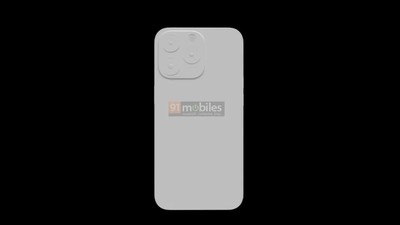 Following renders of the standard ‌iPhone 13‌ model from MySmartPrice yesterday, which showed a new diagonal rear camera layout, these renders of the 6.1-inch ‌iPhone 13‌ Pro reveal a number of small design changes. The website says it received the renders from unnamed "industry sources."

A smaller notch has already been rumored several times for the entire ‌iPhone 13‌ lineup, but this is the first time we have heard that the rear camera unit will be getting larger. All of the elements within the camera bump appear to be spaced further apart as a result.

The ‌iPhone 13‌ Pro purportedly measures in at 146.7mm x 71.5mm x 7.6mm. This means the ‌iPhone 13‌ Pro would be 0.2mm thicker than the iPhone 12 Pro, but the other dimensions would remain the same. 91Mobiles speculates that the added thickness may be to accommodate a larger battery, which has been previously suggested by reliable analyst Ming Chi-Kuo.

91Mobiles has previously leaked accurate schematics for the fourth-generation iPad Air prior to its release, as well as CAD renders of the 2021 iPad Pro, but it is yet to be seen if these are also correct.

Theyayarealivin
That’s fine as long it benefits the battery ?
Score: 29 Votes (Like | Disagree)

JonathanLevine
Anyone else think the size of these cameras are getting out of control? I’m all for improved cameras on smartphones, but at what point does the entire back of the phone just become a bunch of camera lenses? The 12 Pro Max’s camera is absurdly huge in every way as it is, I don’t know if I want it to get any bigger than what it already is.

In my opinion, the iPhone X/XS were some of the best looking iPhones ever, in part because of how simple and clean the camera looked.
Score: 21 Votes (Like | Disagree)

darcyf
I have the 11 pro and it’s a beast. News that pro phones are gaining heft while the mini may be getting discontinued is bad news for small handers like myself.
Score: 14 Votes (Like | Disagree)

To me, this is going to be their biggest hurdle into the realm of professional photography. It will always be limited by their inability to add real glass needed for higher end lenses without scaling it to a larger size.

yea, i don't have any illusions about professional photography on smartphones, nor do i feel it's a necessity. but in order to have good quality pointandshoot on a smartphone — good optical zoom is essential.
Score: 11 Votes (Like | Disagree)

otternonsense
I'm not sure if added thickness and super flat edges mix well. The ergonomics of such a brick are inferior to the soapbar design that peaked with the 11 Pro (that green tint was gorgeous too).

Anyone else think the size of these cameras are getting out of control? I’m all for improved cameras on smartphones, but at what point does the entire back of the phone just become a bunch of camera lenses? The 12 Pro Max’s camera is absurdly huge in every way as it is, I don’t know if I want it to get any bigger than what it already is.

In my opinion, the iPhone X/XS were some of the best looking iPhones ever, in part because of how simple and clean the camera looked.

100% agree. For me, the iPhone's aesthetics peaked with the X/XS. The 11/12 have felt like a step backwards.
Score: 9 Votes (Like | Disagree)
Read All Comments