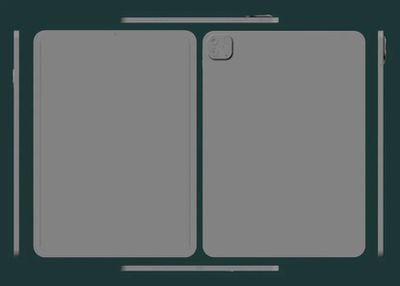 Rumors suggest Apple plans to announce two new ‌iPad Pro‌ models in both 11-inch and 12.9-inch versions, and today's images offer perhaps the clearest indication yet that Apple's next-generation iPad Pros will have minimal, if any, external design changes.

According to MySmartPrice, the the fifth-generation 11-inch ‌iPad Pro‌ will be the same thickness, but Apple will "shave off some millimeters from the length and breadth." The device may also exhibit changes to the internal speaker system, by potentially reducing the number of speakers grilles and relocating them.

Previous rumors about the next-generation ‌iPad Pro‌ models indicate no changes to the display size or housing, but A-series chip performance is expected to be "significantly improved."

According to one rumor, the rear cameras are said to protrude less in the new ‌iPad Pro‌ models. Specifically, the camera bump will remain, but the protrusion of the individual camera lenses will not be required.

There is also the suggestion that Apple will release standard ‌iPad Pro‌ 11-inch and 12.9-inch updates, while also making a separate high-end mini-LED 12.9-inch model, which could be about 0.5mm thicker to accommodate the higher spec display.

DigiTimes believes Apple is working on a 5G iPad with mmWave support, which would be positioned as a high-end ‌iPad Pro‌, and 5G support could be released alongside the new mini-LED display.

Marbles1
The camera bump is so annoying when you're using the iPad flat on the desk.
Score: 29 Votes (Like | Disagree)

danbalsh
Would be amazing if they change the 'default' orientation to landscape and moved the front facing camera.
Score: 23 Votes (Like | Disagree)

Wish Apple address the durability of the iPad with this design, big reason for me not to buy it. Carrying such expensive device that can broke/bend easily even with a care.

having the IPP 12.9 used by the entire family including a 3yo & 6yo kids (we have it around 2 years now) , aside from some scratches on the exterior housing due to falling off the couch or kids wielding it like paper to realize its not and ram it into a wall :( , everything is great , still great battery , still great performance , no bending here FYI.

Could you bend it if you try ? I guess so , but if the reason you are not getting one is durability then you've been reading too much forum posts (ppl usually post on their problems) , this is a non issue in the real world for MOST folks , get one , you won't regret it !!
Score: 17 Votes (Like | Disagree)

gnomeisland
I hope they’d don’t shave off just enough to make it no longer compatible with the current magic keyboard!
Score: 16 Votes (Like | Disagree)

Bazooka-joe
I will hold off from updating my 2018 11 inch pro until there are some significant updates
Score: 10 Votes (Like | Disagree)
Read All Comments

Thursday August 5, 2021 3:48 pm PDT by Juli Clover
Apple in May released the new M1 11 and 12.9-inch iPad Pro models, and they're the first iPads that use Apple's M-series chips designed for Macs instead of A-series iOS chips, and the 12.9-inch iPad Pro has an all-new mini-LED display. Subscribe to the MacRumors YouTube channel for more videos. We did a hands-on video back when the M1 iPad Pro first came out, but MacRumors videographer Dan...
Read Full Article • 106 comments