With March drawing to a close and no sign yet of an Apple media event, rumors are continuing to dominate the news cycle. This week saw a number of new reports about the iPhone 13, a potential "rugged" Apple Watch model, a HomePod with a screen and camera, and more. 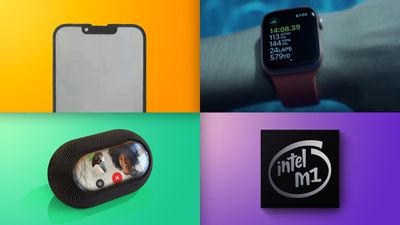 The competitive dispute between Apple and Intel also took an interesting turn this week, with Intel CEO Pat Gelsinger announcing a new strategy for the chipmaker that will see it pursuing other companies like Apple in hopes of manufacturing their custom chips. Read on for all of the details on these stories and more!

iPhone 13 models are widely expected to feature a smaller notch, and now we have a first look at the potential design.

Greek repair provider iRepair this week provided MacRumors with an alleged photo of front glass panels for iPhone 13 models, with the same three 5.4-inch, 6.1-inch, and 6.7-inch display sizes as the iPhone 12 lineup. The notch on each iPhone is visibly smaller as a result of the earpiece speaker being moved up into the top bezel, a design choice that was first rumored for iPhone 12 models last year but failed to materialize.

Multiple sources have claimed that iPhone 13 models will feature a smaller notch, including analyst Ming-Chi Kuo.

After shrinking the notch this year, Kuo said that Apple plans to switch to a hole-punch display design for at least some 2022 iPhone models, similar to Samsung's Galaxy S21 and other recent smartphones, followed by an iPhone with a true all-screen design without a notch or holes and an under-display fingerprint scanner as early as 2023.

The latest Apple Watch models are water-resistant to 50 meters, but Gurman suggests that Apple could make a new device more "rugged" by giving it a rubberized casing, making it more resistant to damage in extreme environments compared to the current lineup of aluminum, titanium, and stainless steel cases.

In an interview with the BBC, Intel's new CEO Pat Gelsinger said "everybody wants multiple suppliers" for chips, adding that there is "very real potential" for a renewed partnership.

When asked why Intel chose to run an advertising campaign against M1 Macs while hoping to win Apple's business, Gelsinger said "we have great respect for Apple as a company" but added "at the same time, we're going to be aggressive competitors and we're out to reinvigorate the PC ecosystem."

Apple currently relies on Taiwanese manufacturer TSMC for all of its custom-designed chips for the Mac, iPhone, iPad, and other devices.

In a report focused on an unactivated temperature and humidity sensor uncovered in the HomePod mini this week, Bloomberg's Mark Gurman briefly mentioned that Apple has "been developing new speakers with screens and cameras."

This reporting suggests that Apple could be at least exploring the idea of new HomePod models with a display and camera to compete with the likes of Google's Nest Hub Max, Amazon's Echo Show, and Facebook's Portal, but Gurman cautions that "a launch isn't imminent," so there is no guarantee that Apple will release such a product.

Earlier this month, Apple announced that it is discontinuing the full-sized HomePod and shifting its focus to the HomePod mini. Gurman said that Apple still lacks a "unifying strategy" for the smart home market, with some people within the company apparently blaming the lack of progress on Siri's shortcomings compared to Google Assistant and Amazon Alexa.

Apple this week discontinued 512GB and 1TB SSD storage configurations for the 21.5-inch 4K iMac, leaving a 256GB SSD or 1TB Fusion Drive as the only options available for the computer.

Both of these moves likely foreshadow the introduction of a redesigned iMac with an Apple silicon chip later this year. Rumors suggest the new iMac's design will resemble Apple's high-end Pro Display XDR, with thinner bezels around the display, no metal "chin" below the display, and a flat back. Two unreleased iMacs were referenced in the latest macOS 11.3 beta.

I really would prefer a HomePod without a camera. Why does everything have to have a camera.

Because the NSA wants cameras and microphones on everything possible to spy on you.
Score: 6 Votes (Like | Disagree)

Azeroth1
I really would prefer a HomePod without a camera. Why does everything have to have a camera.
Score: 6 Votes (Like | Disagree)

RickDEGH
I see the notch as a signature look of the iPhone; reducing it brings disharmony to that look - different iPhones with different look notches. This particular one looks like that of the Google Pixel 2 (ugly). Either the current horizontally elongated notch or perhaps hole punch like the Samsungs, or nothing at all. Seeing that the latter is impossible given the functionality of the notch, I say leave it as it is, to create harmony in design.
Score: 4 Votes (Like | Disagree)

tonie walker
i expect an announcement this coming week...
Score: 2 Votes (Like | Disagree)

I really would prefer a HomePod without a camera. Why does everything have to have a camera.

It's like every app that just has to have "stories"..

Personally I'm waiting for the smaller notch though it's no big achievement after 5 whole years.
Score: 2 Votes (Like | Disagree)

The_Martini_Cat
Technically, rumors are not really part of the news cycle, they’re part of the rumors cycle!?? But some SSD parts no longer being on some iMacs IS news. It means ... new macs & they might be iMacs! (The parts could also go into MacBook Pros). Either way, I’m sure I’ll have many great new Apple products to choose from for my birthday this summer!?? (in rumor calendar terms, can I make the case that the summer crosses into the iPhone 13 announcement???
Score: 2 Votes (Like | Disagree)
Read All Comments

Monday February 6, 2023 10:13 am PST by Juli Clover
Apple today released new tvOS 16.3.1 and HomePod 16.3.1 software updates, with the software coming two weeks after the tvOS 16.3 and HomePod 16.3 updates were released. According to Apple's release notes for HomePod software 16.3.1, the update includes general performance and stability improvements. Notes for tvOS 16.3.1 are unavailable as of yet, but are probably similar to the HomePod...
Read Full Article • 140 comments