Ahead of the debut of AirTags and support for locating third-party Bluetooth items through Find My in iOS 14.5, a team of security researchers from the Secure Mobile Networking Lab at the Technical University of Darmstadt in Germany has reverse engineered the ‌Find My‌ protocol and developed an app that's designed to let anyone create an "AirTag" based on a Bluetooth-capable device. 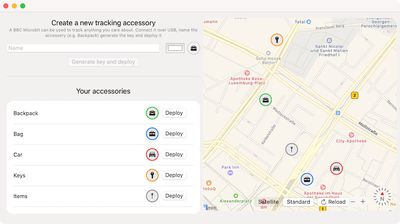 Called OpenHaystack, the app and the source code are available on GitHub for those who are interested in taking a look. The app allows users to create their own Bluetooth tags based on the ‌Find My‌ network by installing an "AirTag" firmware image on a Bluetooth dongle.

The app displays the most recent location of a created Bluetooth tag reported by any iPhone using Apple's ‌Find My‌ network that was implemented in iOS 13, plus it shows the location of the tag on a map.

According to the security researchers, the created tags send out Bluetooth beacons, which are picked up by nearby iPhones that interpret the sending device as lost. The current geolocation is end-to-end encrypted and then uploaded to Apple, with the OpenHaystack app then downloading the encrypted report from Apple and decrypting it locally on the Mac.

In the process of developing this tool, the Secure Mobile Networking Lab researchers also identified a macOS Catalina ‌Find My‌ vulnerability that was reported to Apple and addressed in a 10.15.7 update released back in November. The vulnerability allowed a malicious app to access iCloud decryption keys to download and decrypt location reports submitted by the ‌Find My‌ network.

At the current time, in-app tracking is limited to Beats headphones and upcoming Belkin wireless earbuds, but in the future, many third-party Bluetooth devices may include ‌Find My‌ integration, making it easier to keep track of them. This system will also be used by Apple's own rumored AirTags, which have yet to be released.

This is good stuff guys! Apple is on top of it

Apple is on top of it? What does that mean?
Score: 7 Votes (Like | Disagree)

coolfactor
This strikes me as concerning.
Score: 6 Votes (Like | Disagree)

The article is about a couple of researchers creating an app that reverse engineers Find My. This isn't awesome stuff. This is concerning.

Edited to correct my misunderstanding.
Score: 5 Votes (Like | Disagree)

Why not? Security holes are bad. Anyone who wants to integrate into the Find My network can do so the official way.
Score: 5 Votes (Like | Disagree)

I hope Apple does patch the vulnerability and render this app useless.
Score: 4 Votes (Like | Disagree)
Read All Comments

Tuesday April 6, 2021 11:06 am PDT by Juli Clover
Apple is getting closer to launching the third-party program that will allow item trackers and other Bluetooth devices to be tracked using the Find My app, based on the launch of a new app. As noted by TechCrunch, Apple Sunday introduced the Find My Certification Asst. app, which was created exclusively for Made for iPhone (MFi) licensees who need to test their accessories with the Find My...
Read Full Article • 35 comments

Friday December 3, 2021 7:10 am PST by Hartley Charlton
Apple's AirTags are being used in an increasing number of targeted car thefts in Canada, according to local police. Outlined in a news release from York Regional Police, investigators have identified a new method being used by thieves to track down and steal high-end vehicles that takes advantage of the AirTag's location tracking capabilities. While the method of stealing the cars is largely ...
Read Full Article • 237 comments