As expected, Apple has officially retired its Music Memos app, which allows musicians and songwriters to capture song ideas on the fly. 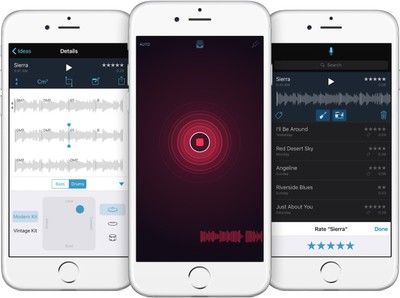 As noted by The 8-Bit, as of today Music Memos no longer shows up in App Store searches. Nevertheless, users who installed the app prior to March 2 can still use it and re-download the app if necessary using their ‌App Store‌ purchase history.

Apple announced in December that it planned to retire Music Memos after March 1, and advised users to export their Music Memos recordings to the Voice Memos library to ensure that they're saved.

Originally launched in January 2016, the app was able to analyze rhythm and chords of acoustic guitar and piano recordings, and instantly add drums and a bass line to provide a virtual, customizable backing band.

However, after improving Voice Memos in step with newer releases of iOS, Apple clearly became less convinced of the utility of also offering the Music Memos app, which received few updates in the course of its life.

The last update, version 1.0.7, only added the ability to export Music Memos recordings to the Voice Memos library, and Apple now encourages all musicians to use Voice Memos over Music Memos. Apple says that Voice Memos can be used to quickly capture ideas just as easily, and recordings can be taken further with GarageBand.

Exporting Music Memos to Voice Memos requires an iPhone with iOS 14 or an iPad with iPadOS 14, along with the latest versions of Voice Memos and Music Memos. Exported content will appear in Voice Memos in a folder titled "Music Memos."

HaywireTX
If you understood the app, you would be sad that it went away. It was a great app that Apple should have expanded on.
Score: 17 Votes (Like | Disagree)

Clearly, this one of those Apple ideas that seemed like a good thing at the time, but never really caught on with musicians. When it comes down to it, there are really only two ways of recording music these days

humm not really. As a riffmaker (and many I know) that was a go-to app for quick recording ideas, as most of the time inspiration strikes in weird places... At least for me, rarely in front of my console. Cool feature to get auto drums and bass for a quick feel. The thing with companies these days is that the second an app doesn't really grow, they remove it, instead of adding to it, or at least, asking us users what could be cool...

This is exactly the kind of app that could've of been really cool if it got a bit more love. I'm sure Apple has the resources and could've made it much cooler. Especially if it made it work with the music app and logic for example... and never did. Because Apple never asks.

Clearly, this one of those Apple ideas that seemed like a good thing at the time, but never really caught on with musicians.

When it comes down to it, there are really only two ways of recording music these days, audio and MIDI. For audio, there really isn't a need to have anything fancier than a cheap voice recorder if you just want to put some ideas down. For MIDI, it's of course nice to have a DAW, but there are also standalone sequencers, workstations and apps that are good tools for this.

Maybe in several years after the AI to recognize the artist's intent when they recorded the "music memo" is more advanced and capable of producing a good result, something like Music Memos might be a good idea. Perhaps Apple will revive it then.

This app wasn't intended to be used for normal music production, it's use case was to capture ideas for songs quickly
Score: 7 Votes (Like | Disagree)

Feyl
Am I the only one who used this app?
Score: 7 Votes (Like | Disagree)

Am I the only one who used this app?

No. I am quite sad that they are removing it. As a guitarist, it is really useful because the notes part of it allows me to very quickly jot down the tuning and Capo position. Shame really, wish they had just open-sourced it.
Score: 7 Votes (Like | Disagree)
Read All Comments

Wednesday March 31, 2021 10:22 am PDT by Juli Clover
The sixth beta of iOS 14.5 that was released this morning introduces two new Siri voices that are available in English, plus it adds a new setup selection option that will let people choose their preferred Siri voice rather than defaulting to a female voice in the United States. Subscribe to the MacRumors YouTube channel for more videos. The Siri changes were outlined by TechCrunch, and the...
Read Full Article • 182 comments

Monday April 26, 2021 9:44 am PDT by Joe Rossignol
Apple today announced its Voice Control accessibility function has been expanded in iOS 14.5, gaining English support in Australia and Canada and adding support for Spanish in Mexico, Spain, and the United States. First introduced in iOS 13 and macOS Catalina, Voice Control allows users to navigate and interact with their iPhone, iPad, or Mac using voice commands to tap, swipe, type, and...
Read Full Article • 2 comments

Friday June 4, 2021 4:06 am PDT by Hartley Charlton
Mercedes-Benz has announced that Apple Music integration is coming to its MBUX infotainment system, starting with C-Class, S-Class, and EQS models. Apple Music will integrate directly into Mercedes-Benz's MBUX infotainment system. Users simply need to link their online "Mercedes me" account to their vehicle, and then Apple Music subscribers will have access to its full library of more than...
Read Full Article • 72 comments

Wednesday May 12, 2021 4:00 am PDT by Tim Hardwick
Apple has shared the trailer for its upcoming docuseries "1971: The Year That Music Changed Everything," which premieres May 21 on the Apple TV+ streaming service. Hailing from Universal Music Group's Mercury Studios and On The Corner Films, the eight-part series announced last month is described as an immersive docuseries that will explore the musicians and soundtracks that shaped the...
Read Full Article • 45 comments