Apple today announced it has released a free iOS app called Music Memos that enables musicians and songwriters to record and analyze high-quality, uncompressed audio using the iPhone's built-in microphone, or an external microphone. The app is currently rolling out on the App Store worldwide. 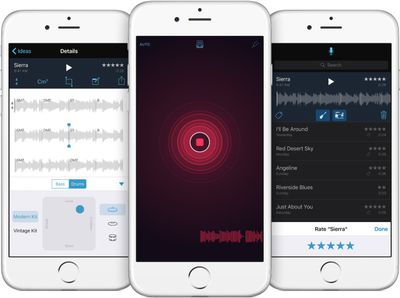 Music Memos displays a small recording button when first opened, along with a waveform at the bottom of the screen while recording. The app can analyze rhythm and chords of acoustic guitar and piano recordings, and instantly add drums and a bass line to provide a virtual, customizable backing band.

Music Memos automatically analyzes the basic arrangement and suggests chords you played for each track. Then you can hear how your music sounds with a realistic virtual drummer and bass player jamming along. If your performance speeds up or slows down, so does the band. You can even tweak the energy and performance of the drums or bass with a few simple controls.

Music Memo, which Apple says was inspired by Voice Memos, can tag songs based on sound, location or a rating, and recordings can be shared on Apple Music Connect, SoundCloud and YouTube. The app is closely integrated with GarageBand for iOS, which has received a major update today.

GarageBand 2.1 for iOS introduces Live Loops, a new feature for creating music by tapping cells and columns in a grid to trigger different looped instruments and samples. Live Loops includes a preset library of Apple-designed loop templates in multiple genres, including EDM, Hip Hop, Dubstep and Rock, or you can create your own.

djcerla
And this is the Apple people love.
Score: 17 Votes (Like | Disagree)

Why is that hilarious? Are you a musician?

As a musician ('http://dylanseeger.com/claye') who has used the stock Voice Memos app since 2009 to create over 4,000 recordings which have helped me write a bunch of songs, I'm excited.

The stock app is garbage—especially since iOS 7—and I've been waiting for sync that was decoupled from the mess that is iTunes since before iCloud was launched.

Why? While the microphone in the iPhone isn't studio quality, it is very good for vocals and acoustic instruments. Uncompressed recordings make it even better.
Score: 10 Votes (Like | Disagree)

Yeah, because everyone know how vital a headphone jack is to RECORDING music!

The port also doubles as a microphone jack, in case you've been living under a rock for the past 8 years.
Score: 9 Votes (Like | Disagree)

Merkyworks
This app will be amazing to use when iPhone 7 arrives without a headphone jack :rolleyes:
Score: 9 Votes (Like | Disagree)
Read All Comments