Apple is continuing to tweak things during the iOS 14.5 beta testing period, and it looks like there will be some nice changes coming in the update when it's released to the public in a month or so. 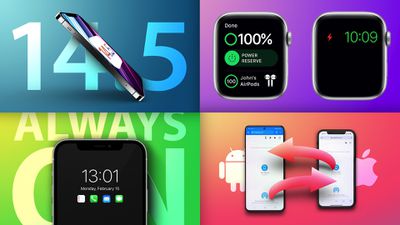 This week also saw the release of a watchOS bug fix update for Series 5 and Series SE owners, addressing a serious issue where their watches may not charge after entering Power Reserve mode, while some iPhone 12 and iPhone 12 mini hardware repairs will no longer require whole-unit replacements. Read on below for details on these stories, iPhone 13 rumors, iPhone tips and tricks, and more!

Apple this week seeded the second betas of iOS 14.5 and iPadOS 14.5 to developers and public beta testers. The second betas add some new features, including new emoji, an option for Apple Music subscribers to share song lyrics on platforms like iMessage and Instagram, a new action for taking a screenshot in the Shortcuts app, and more. We've rounded up everything new in this beta, including hidden code changes.

iOS 14.5 and iPadOS 14.5 are packed with many other features, such as the ability to unlock an iPhone with an Apple Watch while wearing a mask, support for 5G in Dual-SIM mode on iPhone 12 models, new Waze-like features in Apple Maps, and AirPlay 2 streaming for Apple Fitness+ workouts, which became functional in the second beta.

iOS 14.5 and iPadOS 14.5 should be released to all users in late March or early April, but anyone can sign up to be a public beta tester for free to gain early access to all of these new features.

In a new support document this week, Apple said a "very small number of customers" with Apple Watch Series 5 or Apple Watch SE models running watchOS 7.2 or 7.3 have experienced an issue with their watch not charging after it enters Power Reserve.

Apple says customers with an Apple Watch that is exhibiting this issue can contact Apple support to set up a mail-in repair free of charge. Apple has also released watchOS 7.3.1, which prevents this issue from happening to Apple Watch Series 5 or Apple Watch SE units that have yet to be impacted.

The second betas of watchOS 7.4 and tvOS 14.5 have also been seeded to developers and public beta testers.

While we're still many months away from the so-called iPhone 13 lineup, rumors are beginning to surface about potential features for the devices.

The latest word comes from leaker Max Weinbach, who teamed up with YouTube channel EverythingApplePro to share some alleged iPhone 13 features, including an always-on display with a long-awaited 120Hz refresh rate, improved camera capabilities for astrophotography, stronger MagSafe magnets, and an improved frosted glass finish that is "grippier" and "more comfortable" to hold compared to iPhone 12 models.

In an internal memo this week, obtained by MacRumors, Apple informed service providers that it will be introducing a new same-unit repair method for iPhone 12 mini and iPhone 12 models exhibiting certain issues that would typically require a whole-unit replacement.

Genius Bars and Apple Authorized Service Providers will have a new "iPhone Rear System" part available to them that consists of the rear enclosure of an iPhone with all components except the display and rear camera, including the battery, logic board, Taptic Engine, Face ID system, and so forth.

If a customer has an iPhone 12 mini with cracked rear glass, for example, technicians will be able to replace the entire rear portion of the device, with the new enclosure affixed to the original display and rear camera. For this reason, the customer's display and rear camera must be free of damage or functional failures in order for their device to qualify.

In one of our latest YouTube videos, we've rounded up some useful iPhone tips and tricks, and they are worth checking out for both new and longtime users.

For instance, did you know that you can create a quick shortcut for turning on Low Power Mode when the battery dips to a specific percentage? Or did you know that the Apple Watch can be used as a viewfinder when recording a video with your iPhone? Check out our full list of tips and tricks.

Starting with iOS 14.5, iPadOS 14.5, and tvOS 14.5, Apple will be enforcing a new privacy measure that requires apps to request and receive permission from users in order to track their activity across other apps and websites for targeted advertising purposes.

Facebook has been a vocal critic of the move, claiming that Apple's tracking change will hurt small businesses financially. In fact, The Wall Street Journal this week reported that Facebook CEO Mark Zuckerberg told internal aides and team members that his company needs to "inflict pain" on Apple in response to the tracking changes.

Some other advertising companies have decided to move on and accept Apple's change, forming a new "Post-IDFA Alliance" to help advertisers understand how to use user data in an "Apple-friendly manner."

TouchID isn’t coming back to flagship iPhones, and more articles point to ditching the port completely. These devices keep getting smaller, with more features built-in. Not bigger to accommodate older ports or concepts.

Honestly I didn’t think they’d turn around on the Face ID thing, even with under screen biometrics being better, but I guess with COVID - I’ve seen a few reports now apple finally giving in and going back to touch, but I guess we won’t know until September.

sadly I fear you may be right on the port lol. Man that’d suck, but we know it’s what apple want to do. I’d rather take lightning than nothing, but until September I can keep hoping for USB-c lol
Score: 1 Votes (Like | Disagree)

It’s never coming back. It’s not 2015 anymore lol. Face ID is a much better solution. Literally, why do you want them to bring back something that is older, inferior and less premium

And here I was thinking no one could ever be a bigger d*** than Bezos. But I guess Zuck loves to keep proving people wrong!

Zuckerburg has been a d-bag from birth. Nothing is going to change, except hopefully more people will wake up and delete their facebook accounts altogether. I couldn't be happier after deleting my account three months ago. As a photographer, I unfortunately still use instagram due to business considerations, but I would happily ditch that too if an strong alternative were created.

We need new 'digital ownership' and digital rights laws to protect us both from corporate and government surveillance. The government isn't allowed to open our mail (or tap phone lines) without a warrant, and there's no reason they (or corporations) should be able to see any of our communications without one. It's way past time for it.
Score: 1 Votes (Like | Disagree)
Read All Comments