The iOS 14.5 beta, available to developers and public beta testers, adds a new Apple Maps feature that lets you report accidents, hazards, and speed checks along your route when getting directions. 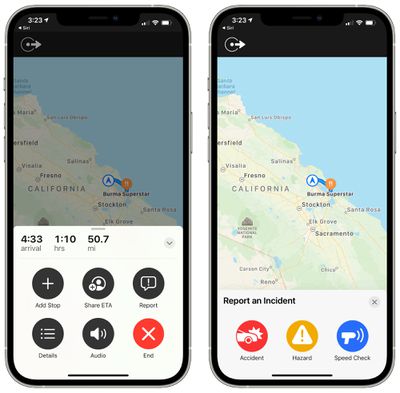 When you input an address, select a route, and then choose "Go," Siri lets you know that you can report accidents or hazards that you see along the way.

If you swipe up on the ‌Apple Maps‌ interface where maps details are available, you can tap on a "Report" button that lets you flag an accident, a hazard, or a speed check, similar to other mapping apps like Waze. Tapping automatically flags your location with no confirmation window, so it shouldn't be used except in a valid situation.

You can also say "Hey ‌Siri‌, there's an accident" and ‌Siri‌ will send in a report to ‌Apple Maps‌, and presumably, if enough people file reports, an accident site will show up in the maps app through the crowdsourcing. This is available in the United States in a test capacity at the current time, and it's not yet clear if it's also showing up in other countries.

This also works in CarPlay, as noted on the MacRumors forums by MozMan68, with the reporting interface available on the ‌CarPlay‌ screen.

Note that ‌Siri‌ will inform you about the new accident reporting functionality the first time that you seek directions after upgrading to iOS 14.5, but the feature is not mentioned after that. There is no similar accident reporting functionality available in iOS 14.4, and it also does not appear to be showing up for all iOS 14.5 users at this time based on reports from Reddit, so there is likely a server side element.

mtrctyjoe
I never thought Apple would ever grow a pair and do this. Thank you Apple :-). The Waze UI is a steamy pile, I was never a fan.
Score: 28 Votes (Like | Disagree)

waze is a much more superior app in terms of interface and functionality. this is a nice move on apple's part, but thank goodness we can choose alternate, more robust applications for these purposes.

The good thing here is this app is Google free tracking and mining. :D
Score: 19 Votes (Like | Disagree)

iLoveDeveloping
Add a police option and bye bye Waze!! This is awesome!
Score: 19 Votes (Like | Disagree)

I still won't trust the speed trap indicator in the updated Maps app. It's not like it'll be 100% accurate, so a "speeding ticket" (even though the govt purposely makes the speed limit too low to make a profit) will still be a risk. Convince me otherwise.

I found this amazing life hack so you can’t ever get a speeding ticket, no matter how sneaky the cop is.

what you do is, when driving... you don’t exceed the posted speed limit.

Being that the idea is ostensibly to get people to slow down, I'd say it's exactly their purpose.

If people literally just slow down where they think/know there is a cop and speed up the rest of the way that kind of defeats the purpose.

No, the idea is to raise money from speeding tickets. Today's speed limits were made for cars in the 90's... You know, ones that don't have 10 speeds, 20" tires, computerized technology combined with the parts, and don't average 150-300 horsepower for a daily driver.

im curious what logic you’re using to think that speed limits set in the 90s would no longer be applicable due to any of that.
Score: 16 Votes (Like | Disagree)

krifor03
THIS was the last thing i needed to finally free me from Waze ?

Deals: Get Up to $149 Off Apple's 24-Inch iMac Thanks to Record Low Prices on Amazon