Apple on Tuesday released the second betas of iOS and iPadOS 14.5 to developers, and while there were some new additions worth highlighting, most of the more notable features were thought to be already available in the first set of betas. 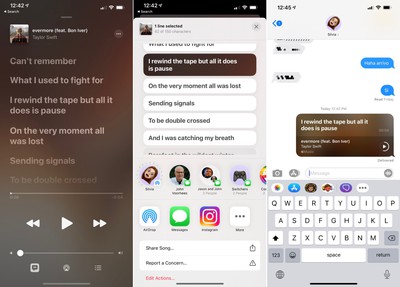 While viewing the real-time lyrics of a playing song, it's possible to long press individual lines and share them via the Actions menu, which includes support for Instagram Stories.

According to Viticci, if users opt to share over iMessage, an ‌Apple Music‌ card appears in the conversation, and will even allow the recipient to play that specific part of the song in Messages via a playback button.

It's also possible to select up to five lines of lyrics from a specialized share screen, enabling users to create longer cards for use in Instagram Stories and iMessage.

Amazing feature in iOS 14.5 beta 2: you can now share lyrics from Apple Music. Long-press any line in real-time lyrics to share. There is support for Instagram stories and even iMessage cards, which will play that specific part of the song in Messages. pic.twitter.com/LbsLK60Tr3 — Federico Viticci (@viticci) February 17, 2021

Previously, changes in ‌Apple Music‌ in the second iOS 14.5 beta were only thought to include some additional interface gestures for playing and queuing songs, along with some minor cosmetic tweaks.

For all the other changes that have been spotted in the first and second betas of iOS 14.5, be sure to check our dedicated roundup.

PsykX
I love the fact that since the last 2-3 years maybe, Apple is finally giving importance to lyrics.

For me, lyrics has always been in the core of my musical experience, and I'm glad Apple has pushed it even further with lyrics syncing, lyrics scrubbing, lyrics search, lyrics voice search and now lyrics sharing.
Score: 8 Votes (Like | Disagree)

EugenesSoggySalami
Now the only thing I need is a friend who likes sad, melancholic and depressing death metal and funeral doom.
Score: 6 Votes (Like | Disagree)

Captain Trips
Although I have never wanted to do this in the past, I can see it being a cool feature.

Many times I have said something along the lines of "you know, Song X by Band Y - remember?"

Be nice to include a brief song clip or part of the recognizable lyrics.
Score: 4 Votes (Like | Disagree)

Digital Dude
Damn, I'm getting old. For me, this feature is about as exciting as being stuck in an elevator with an insurance salesman.
Score: 2 Votes (Like | Disagree)

Although I have never wanted to do this in the past, I can see it being a cool feature.

Many times I have said something along the lines of "you know, Song X by Band Y - remember?"

Be nice to include a brief song clip or part of the recognizable lyrics.

This will be an incredible feature.

A guy/gal wants to say something really special and could do so with a soundbite (5/10 seconds) with lyrics to evoke their emotion much better than a silly overplayed emoji. Think .... John Cusack in Say Anything ... 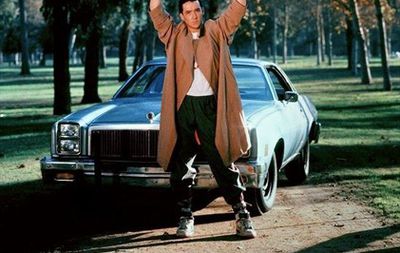 Now ... if you can send a music bite with lyrics while also sending your favourite animoji singing it ... then it can be funny silly. In fact Apple somewhat did this (although manually) when introducing animoji, and fans went gangbusters with their own serenade.
Score: 2 Votes (Like | Disagree)

are the clips only good to listen to apple music subscribers? if so its completely useless

For you. Not for the millions using Apple Music. 72 million to be exact. And that number is growing. Nothing useless about features that enhances a music experience if you ask me.
Score: 2 Votes (Like | Disagree)
Read All Comments

Wednesday April 21, 2021 8:06 am PDT by Sami Fathi
Apple is bringing Apple Music editorial content into Apple News as a way to offer readers even more content about the artists, songs, and more that they love. Apple has started a new Apple Music channel within Apple News, as first spotted by MacStories, that currently has a limited selection of articles, but seems to be frequently posting. Based on the current posts, Apple plans to publish...
Read Full Article • 6 comments

Saturday May 22, 2021 6:53 am PDT by Joe Rossignol
Apple today shared a new support document confirming that the HomePod and HomePod mini will gain lossless audio support for Apple Music in a future software update, and the document also reveals some other tidbits. First, the document indicates that the Apple TV 4K "currently doesn't support Hi-Res Lossless," with only the standard Lossless tier ranging from 16-bit at 44.1 kHz to 24-bit at...
Read Full Article • 323 comments

Deals: New Discounts Arrive for Apple's MagSafe and MagSafe Duo Chargers (Save Up to $27)