Volkswagen CEO: We're 'Not Afraid' of a Potential 'Apple Car'

Apple is widely rumored to be working on a self-driving car, internally codenamed "Project Titan." Apple reportedly began work on the project in 2014, and years later, the rumor mill is in full swing speculating on when Apple will debut its self-driving technology. Speculation has become so rampant that potential competitors to an Apple Car are already weighing its potential threat to the overall car industry. 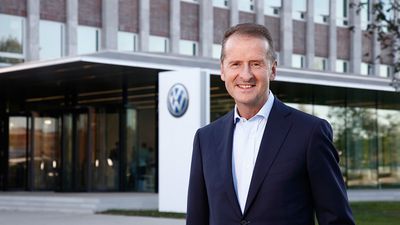 As reported by Reuters today, Volkswagen Group CEO Herbert Diess said that he's "not afraid" of an ‌‌Apple Car‌‌ and that Apple will not be able to overtake the $2 trillion automobile industry overnight. In typical Apple fashion, the company has not confirmed it's working on a self-driving car, but Diess believes that the rumors and reports are "logical." Apple has expertise in battery technology, software, and design, and it can easily utilize all of its proficiency in those areas to create an automobile, the CEO was quoted as saying.

Similar remarks can be traced back to 2006, one year prior to the launch of the iPhone, when the CEO of Palm, which at the time was one of the leading smartphone makers, stated that Apple would not "just figure this out," referring to smartphones. In the years that followed, however, the ‌iPhone‌ would captivate the market, eventually leading it to $65 billion in revenue for a single quarter.

Volkswagen, based in Germany, is one of the largest car manufacturers in Europe and around the world, giving it a significant position in the industry. Diess said he is not concerned that Apple joining the market would disrupt Volkswagen's dominance, saying that despite Apple's expertise in all of the technology needed to create a car, his company is still "not afraid" and that Apple "will not manage" to disrupt the market overnight.

Until this year, very little was known about how Apple would go about building an actual self-driving car. Apple uses third-party suppliers such as TSMC and Foxconn to build current products like the ‌iPhone‌ and Mac, but none of its current suppliers are fully positioned to build an automobile. On that front, Apple is expected to partner with an already well-known and established car maker to fulfill its self-driving car ambitions.

In early January, reports began to surface that Apple was close to inking a deal with Hyundai, after the automaker released a statement confirming that it was in talks with the tech giant. The statement was quickly revoked and reworded to exclude mentions of Apple, and it has since been reported that talks between Hyundai and Apple have ground to a halt.

Multiple sources have suggested different timeframes for the launch of the ‌Apple Car‌, with the earliest reports suggesting a release as early as 2024. Bloomberg, however, believes that the car is "nowhere near production stage" and that a release is at least five to seven years away.

djcerla
“We’ve learned and struggled for 84 years here figuring out how to make a decent car,” Volkswagen CEO said.

Falhófnir
And I'm pretty sure Nokia said the same thing about the iPhone...
Score: 25 Votes (Like | Disagree)

Seanm87
Why do these companies always do this? They underestimate Apple then just get humiliated when they end up being successful.
Score: 25 Votes (Like | Disagree)

And I'm pretty sure Nokia said the same thing about the iPhone...

Nokia could have survived going the Android way, but they selected the wrong partner.

BTW the Nokia phone with Microsoft Mobile were very good, fast and easy to use. But Microsoft messed it completely when they restructured.
Score: 18 Votes (Like | Disagree)

TheOldChevy
Why would they be afraid ? Tesla is already very present for investors but it didn't take any of the VW market shares. Apple will most probably not be different, if they ever actually come in this market. The automotive market is experiencing a revolution today anyhow and companies with strong RnD teams like VW or Toyota are well positioned to profit from it.
Score: 17 Votes (Like | Disagree)
Read All Comments

Tuesday April 20, 2021 7:59 am PDT by Sami Fathi
Apple can be expected to shed some light on its highly secretive internal project called "Project Titan," a codename for its self-driving car sometime in the next 3-6 months, according to Wedbush analyst Dan Ives. Ives made the comments during a segment on CNBC Television, in which he reiterated Wedbush's belief that Apple will not actually release a consumer car until at least 2024. Ives...
Read Full Article • 42 comments