Fan-favorite small tablet, the iPad mini, may disappoint some users with its sixth-generation model, which is expected to arrive as soon as March. 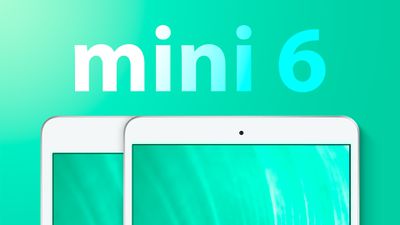 The ‌iPad mini‌ most recently got a refreshed design in 2015 with its fourth iteration. While the device did receive a minor update in 2019 with the A12 Bionic chip, a True Tone display, Bluetooth 5.0, and Apple Pencil support, the ‌iPad mini‌ appears to be overdue for an update once again.

A recent report from Japanese site Mac Otakara, citing supply chain sources in China, said that the next ‌iPad mini‌ will have an 8.4-inch display, up from the current 7.9-inch screen size. This was suggested by analyst Ming-Chi Kuo as early as May 2020, and has been echoed in subsequent months by other sources.

This approach is also rumored to extend to the upcoming ninth-generation low-cost iPad, which is expected to adopt a design that is virtually identical to the iPad Air 3. With no USB-C, a ‌Touch ID‌ Home Button, and an older front design, ‌iPad mini‌ fans may have to wait for a seventh-generation device for the ‌iPad‌ Pro-style design to trickle down to the smallest Apple tablet.

Mac Otakara believes that the refreshed ‌‌iPad mini‌‌ will see a March launch, so it could perhaps debut at an event in March if Apple has one planned. This also fits in with Kuo's claim that the next ‌iPad mini‌ will come in the first half of 2021.

In addition, Kuo has said that Apple is working on an ‌‌iPad mini‌‌ with a mini-LED display, but it seems unlikely that the ‌‌iPad mini‌‌ 6 would gain this significantly upgraded display considering that it has not yet come to any other Apple device.

Thursday July 22, 2021 9:03 am PDT by Joe Rossignol
Apple is widely rumored to be planning a new iPad mini with a significant redesign, including a larger 8.5-inch to 9-inch display with slimmer bezels, a Touch ID power button instead of a home button, a USB-C port instead of a Lightning connector, and more. According to a paywalled preview of a DigiTimes report today, the sixth-generation iPad mini will also feature a mini-LED display:BLU...
Read Full Article • 104 comments

Friday August 12, 2022 12:46 pm PDT by Juli Clover
Samsung this week launched its fourth-generation foldable devices, the $1,000 Galaxy Z Flip and the $1,800 Galaxy Z Fold. Though there's no sign of a comparable Apple foldable device on the horizon, rumors suggest prototypes are in the works, so we thought we'd take a look at Samsung's newest smartphones to see what Apple needs to measure up to when a foldable iPhone does come out. Subscribe ...
Read Full Article • 272 comments