Apple's rumored high-end iPad Pro models to be released next year will be 5G-enabled with mmWave support, according to sources cited by industry publication DigiTimes. 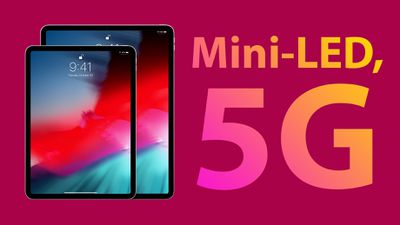 Multiple rumors have suggested Apple is planning to release a high-end 12.9-inch ‌iPad Pro‌ with a mini-LED display next year, with the possibility that there will be an 11-inch mini-LED model too, but details beyond that have been scant.

According to today's report, however, Apple's success in developing its own in-house mmWave AiP (antenna in package) modules for next year's iPhone lineup has increased the likelihood that next-generation models in Apple's iPad range will also benefit.

The self-sufficiency in design and development of AiP modules also means that Apple's next-generation high-end iPad products to be released in 2021 may also come with mmWave technology, said the sources.

While not specified, it is almost certain that these models would be ‌iPad‌ Pros given 5G is a high-end feature with higher production costs.

mmWave or millimeter wave is a set of 5G frequencies that promise ultra-fast speeds at short distances, making it best suited for dense urban areas. By comparison, sub-6GHz 5G is generally slower than mmWave, but the signals travel further, better serving suburban and rural areas. iPhone 12 models in the U.S. exclusively support mmWave, while next year's ‌iPhone‌ series could see a wider rollout of the technology.

According to DigiTimes' sources, Apple's latest push on the development of AiP modules indicates that it is moving one step further towards develop RF front-end (RF-FEM) modules in-house, with the ultimate goal of supplying its own modem devices.

Apple analyst Ming-Chi Kuo says that production will begin on mini-LED displays for the ‌iPad Pro‌ in the fourth quarter of 2020, with a launch expected in the first half of 2021. DigiTimes has also reported that a mini-LED ‌iPad Pro‌ will launch in early 2021, as has Korea's ETNews.

Yes, and usually I bought the wifi one too, there's iPhone for cellular business through mobile hotspot.
Score: 5 Votes (Like | Disagree)

h3ysw5nkan
Even wifi coverage is better than 5G cellular, what's the point of a 5G cellular iPad?
Score: 4 Votes (Like | Disagree)