Despite mocking Apple for no longer including a charger with the iPhone, Samsung and Xiaomi are now expected to follow suit and remove the charging adapter from their upcoming smartphones. 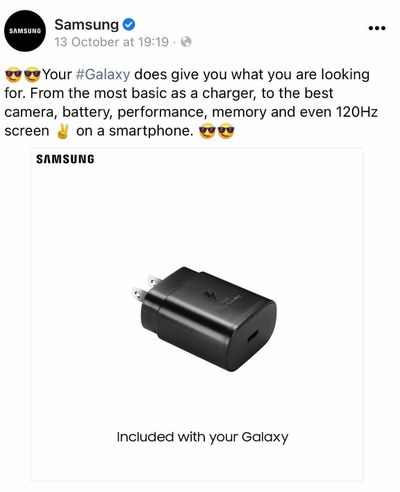 Alongside the announcement of the iPhone 12 and ‌iPhone 12‌ Pro, Apple announced that it would no longer include the charging adapter with all new iPhones, citing environmental concerns. The move was publicly criticized by rival smartphone makers Samsung and Xiaomi.

The day after the announcement of the ‌iPhone 12‌ and ‌iPhone 12‌ Pro, Xiaomi posted a video promoting the Mi 10T Pro on social media showing the unboxing of a charger accompanied by the comment "Don't worry, we didn't leave anything out of the box."

Don't worry, we didn't leave anything out of the box with the #Mi10TPro. pic.twitter.com/ToqIjfVEQX — Xiaomi (@Xiaomi) October 14, 2020

Samsung similarly posted an image of a charger with the text "Included with your Galaxy," and the message:

Your #Galaxy does give you what you are looking for. From the most basic as a charger, to the best camera, battery, performance, memory and even 120Hz screen.

In spite of these social media posts clearly poking fun at Apple's decision, Samsung is now believed, based on regulatory filings, to be removing the charger from the Galaxy S21, which is set to be unveiled on January 14. This may now be more likely considering that Samsung has deleted its "the most basic as a charger" post from social media entirely, as spotted by HTTech.

Xiaomi CEO Lei Jun has also now confirmed on Weibo that the company's upcoming Mi 11 phone will not come with a charger due to environmental concerns. Jun said that smartphone users already have many chargers, so including another with the Mi 11 would contribute to an unnecessary environmental burden:

Xiaomi Mi 11 is officially unveiled with brand new packaging, so light and thin.

Behind the thinness, we made an important decision: in response to the call of technology and environmental protection, Xiaomi 11 canceled the included charger.

Today everyone has a lot of idle chargers, which is both a burden to you and on the environment. We are well aware that this decision may not be understood or even be complained about. Is there a better solution between industry practice and environmental protection?

iPhones now ship without wired EarPods or a power adapter in the box, with only a Lightning to USB-C charging cable included. With these accessories removed, all new iPhones now ship in a thinner box. Apple touts the environmental benefits of no longer bundling these accessories, noting that the move reduces carbon emissions and avoids the mining and use of rare-earth elements.

With a major competitor no longer offering accessories like the power adapter and EarPods, Samsung and Xiaomi may now believe consumers are prepared to purchase accessories separately. Samsung and Xiaomi have been known to follow similar trends set by Apple in the past. For example, Samsung made fun of Apple for removing the headphone jack from the ‌‌iPhone‌‌ 7 in 2016 before mirroring the decision and releasing the 2018 Galaxy A8 without a headphone jack.

sdiori
Right on time, per normal.

Seoras
I'd rather purchase from the "brave" than the hypocrites
Score: 23 Votes (Like | Disagree)

DinkThifferent
Another day another hypocrite in the smartphone universe.

Once again, Apple set the example and the copy cats gonna copy
Score: 23 Votes (Like | Disagree)

Naraxus
This is laughably pathetic.

Psychicbob
Once one company cottons on to a cost saving measure (forget about the environmental argument) the others follow suit quickly. No matter how hypocritical they come across.
Score: 22 Votes (Like | Disagree)
Read All Comments