Leaker known as "DuanRui" has today shared images from Chinese site 52audio of what appears to be redesigned third-generation AirPods. 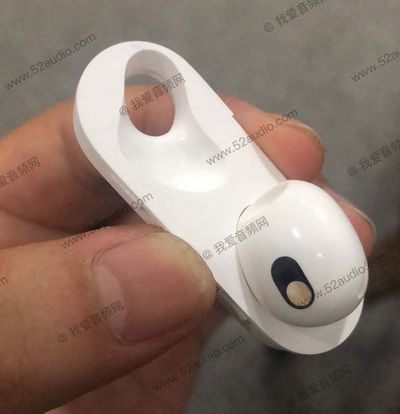 According to translated text that accompanied the images, the first image supposedly depicts a single "earphone shell" and the "charging cockpit shell." The earbud itself seems to be completely redesigned compared to the first and second-generation AirPods, with a larger, rounder shape.

The third-generation AirPods are described as "a scaled-down version of AirPods Pro," with the "internal structure of the headset and charging box" being "basically the same."

A render of the two earbuds shows that they have clearly taken design cues from ‌AirPods Pro‌, with shorter stems and a larger in-ear portion, but without the ‌AirPods Pro‌'s detachable in-ear tips.

The third-generation AirPods will also apparently gain "pressure-sensitive touch" controls from ‌AirPods Pro‌, and this is indicated by depressions in the stem. Without in-ear tips, it is unlikely that they could achieve Active Noise Cancelation, which could serve to differentiate the two models.

A recent report by Bloomberg surmised that third-generation AirPods would arrive next year with a design similar to ‌‌AirPods Pro‌‌, but minus high-end features such as Active Noise Cancelation.

Supply chain analyst Ming-Chi Kuo has also said that third-generation AirPods will launch in the first half of 2021 with a design and compact system-in-package "similar to ‌AirPods Pro‌." Manufacturers are also reportedly preparing for a 2021 launch.

Although the legitimacy of these images is not yet known, the similarity of the alleged images to a range of leaks from reliable sources is striking. The chances of the images being genuine may also be enhanced by the fact they were shared by DuanRui, who has accurately leaked the correct names of the iPhone 12 models and an iPad Air 4 manual revealing its new design.

Update: We've removed an x-ray image shared by 52audio that is clearly just a squished version of the ‌AirPods Pro‌ case. The original report did note that the "authenticity of this picture is in doubt," while the legitimacy of the other images included in the report remains unclear.

Andy-V
The x-ray is the same image but one is squished? Right?
Score: 48 Votes (Like | Disagree)

you get exactly the same picture. Also check the size of the lightning connector.

Abstract
That’s the laziest photoshop ever. ?
Score: 11 Votes (Like | Disagree)

Romke
This is most certainly fake information.
All images 3 are faked. First one is 2 non matching pieces placed together, X-ray is 2x the same image and last one is a badly done 3D render.
Score: 8 Votes (Like | Disagree)

Reapro
New AirPods with a Lightning port that's around half the size. MacRumors use your eyes instead of spreading this garbage.
Score: 8 Votes (Like | Disagree)
Read All Comments